A Skrull Walks Among Us

This is yet another occasion in which Doom appears only briefly as part of the recap, this time on the first page as part of a TV broadcast which the Fantastic Four are watching. This is a lovely example of the "real world" of the Marvel Universe, with the four main characters just sitting around watching telly together. It's not something you'd expect to see in DC's comics of the time, for instance, and sets the tone for the whole first half of the issue, which features a lot of fun with a trip to Hawaii on an Intercontinental Ballistic Missile and some light shopping. 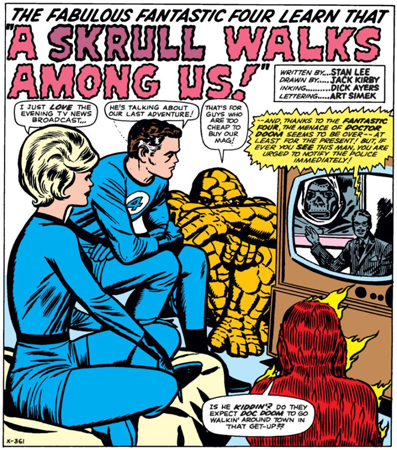 While this is going on we also visit the Skrulls, returning for the first time since their debut way back in Fantastic Four #2. On that occasion they were defeated by Reed Richard's cunning use of pictures of MONSTERS, cut out from issues of 'Strange Tales' and 'Journey Into Mystery'.

The Skrull leader has a much better plan this time. Rather than sending a bunch of dimboes who can't tell the difference between a photograph and a drawing, this time he's deploying a mighty warrior: The Super Skrull! The Super Skrull is pretty flipping cool, as we see when he lands on Earth and, much to the amazement of the New Yorkers around him, declares that he has conquered the entire planet all by himself. 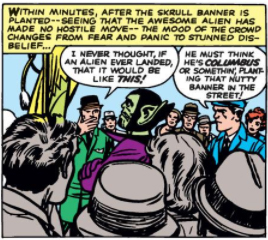 There then follows a series of fights in which the FF get thoroughly duffed up by someone who has all their powers and then some. The team retreat to the Baxter Building for the night to regroup, and it's here that Reed Richards uses his mighty brain to work out that the Super Skrull's powers are being beamed to him by a space ray! All he has to do is develop a Power Beaming Space Ray Jammer, get Sue to stick it onto the Super Skrull's neck, and voila! Problem solved! 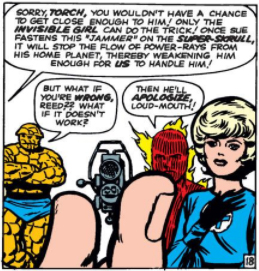 By the standards of the time this is a perfectly logical solution that is part of a lovely issue which really feels as if the series is getting into its stride. There's plenty of fun interaction between the main characters, exciting new ideas, and a finale which doesn't rely on coincidences or some new ludicrous use of Johnny's "flame power". More of this sort of thing please!