If ever a comic undersold itself it has to be this one. The "thrills" advertised on the cover feature "America's most colorful super-combo" being menaced by such exciting dangers as concrete! scaffolding! missing floorboards! wind! It's less a superhero thrillfest, more a public information film warning children about the dangers of building sites.

Once you get inside the comic, however, it's packed full of NUTTINESS and LUNACY. It starts off fairly calmly with the Fantastic Four saying goodbye to Ant Man, last month's guest star, in a neat example of the then-new idea of linking stories together from issue to issue, and indeed from title to title, all compounded by the Thing then relaxing with a copy of "Tales To Astonish" ... featuring Ant-Man! 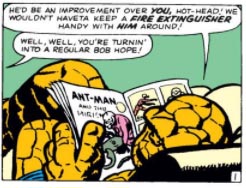 Newsstand distribution of comics at this time meant that there was no guarantee that all, or even most, of those picking up this issue would have read the previous one, so it was traditional to include a recap of previous events at the start of the current issue, usually as part of the story itself. Here Lee and Kirby create an entertaining variation by having Ben, Johnny and Sue telling the story-so-far between the three of them, featuring a lot of interplay and the group's trademark bickering. It's a nice illustration of characterisation as a key selling point for Marvel Comics, differentiating them from the interchangeable characters still being published by their competitors.

Reed however has had enough of the bickering and tells Johnny and Ben to "clam up" and stop "trading love letters". They have work to do - Doctor Doom is still at large!

The team set off to inidividually search the city, which leads to a generous helping of hi-jinks. Ben falls down a manhole and then attacks a man advertising a play set in medieval times, while Sue wrecks havoc when she sees a man demonstrating a toy gun and thinks (understandably) that it's real. Neither this, nor Reed's science or Johnny's heat based sonar system (yet another example of the deranged "science" applied to the Torch's powers) get any results, so they decide to call it a day and head out to their various evening engagements.

As they're leaving they see a big crowd waiting for them in the entrance lobby, but luckily one of the janitors is able to take them out via the service elevator. Once they've gone, however, he removes his disguise and we see that it was Doctor Doom all along, working a new scheme which involves putting tracking devices on their hands!

This is where things start to get particularly nutty, as Doom releases lighter than air robots (no, shut up, that's a thing) to follow each of the four and, basically, mess up their social lives. Johnny is the first victim, as his date is upset to find them being followed around by a goonishly grinning floating zombie. 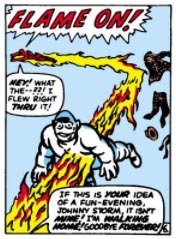 Ben is similarly embarrassed, Sue has a fashion shoot ruined by her own polka dot creature, and Reed loses his chance at an honourary degree because the stuffy old scientists think he's taking the mickey out of them with his own floating goon. 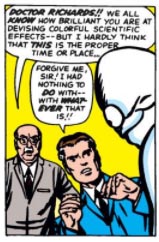 The four regroup and Reed works out that it's something to do with Dr Doom, who's watching them via cameras in the floating robots. Doom then dissolves the weird creatures and declares an end to this part of his plan. 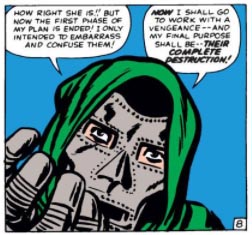 Doom says that he just wanted to wind them up, but he's surely selling himself short here, as the floating robots were an excellent way of gathering intelligence on his enemies' weaknesses. Indeed, he uses this gathered information to develop a revolutionary new scheme - instead of kidnapping Sue, he's going to kidnap Alicia instead!

Doom gets a great moment of self-examination here, musing on the fact that, although he is the equal (not the better, as he would always insist in later years) of Reed Richards intellectually, his one flaw is that he doesn't understand human beings. He goes on to bemoan his status as a "dark wraith" with a deformed face, unable to ever find love and companionship. 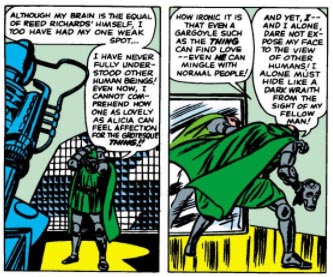 As many people, including me, have said before, the practice of giving their heroes real human motivations and their own flaws and quirks rather than just being "Good" or "Evil" is what set Marvel apart from DC and other publishers of the time. It had worked with the heroes, and here Lee and Kirby apply it to a villain too. This is shown most clearly in the image of a pained Doom unable to look at himself in the mirror, but still drawn towards it. He's still a villain doing villainous things for the sake of revenge, but you do feel some sympathy for him, rather than just waiting for the good guys to beat him up.

Doom carries out his brilliant new plan of kidnapping Alicia and then warns the Fantastic Four not to interfere with the next stage of his scheme, lest he unleash a series of psychedelic horrors on New York. He has a good laugh about it to himself, and then prepares the next part of his cunning scheme - to blackmail President Kennedy into making him a member of the cabinet!

Where to start with this section? It's just three panels but it's SO full of STUFF. First of all there's Doom's laughter, echoing his gleeful enjoyment of his own plan back in issue 10. Kirby draws him in exactly the same pose, reinforcing the characterisation of Doom as someone who enjoys his work, and enjoys enjoying it!

The rest of the sequence deals with what he sees as the nobility of his actions. He could have money if he wanted, easy peasy, but he requires something higher, more laudable - power! And he's going to do that by ... joining the advisory body of the government's executive branch. I can't be the only person who doesn't flash forward here to Austin Power's Dr Evil and his demand for "a million dollars"?

Another revolutionary aspect of "Marvel Age" storytelling was its engagement with the modern world, which we see here in a lovely sequence where John F Kennedy's hair discusses the problem posed by Doom's demands.

There's also an interesting look at how this affects world affairs. Doom demonstrates his power by wrecking electronic gadgets all over America, which causes much delight among Russian generals, who are then upbraided by Krushchev himself.

If Marvel came make their main villain into a sympathetic character then they can also make a case for the leader of America's greatest enemmies being a sensible human being. This also reflects a gradual change of attitude in the 1960s towards "the commies", as Krushchev began a gradual policy of change in the Soviet Union, leading to rapproachment in the next decade.

The US government come to the Fantastic Four for help, and Reed reveals that he's been busy working out what's going on. He's discovered Doom's hidden airship, and realised that the Grinning Floaters had actually been used to transmit printed circuits of the Fantastic Four's atomic and molecular structure! It wasn't just a wind-up after all!

He works all night long and develops a solution which can change him back to a human being but only temporarily. This section, by the way, is a cracking read - both men know that they have no idea how long the effect will last, which means that if he changes back too soon he'll be killed by the circuit, but they're prepared to take the risk. Thus Ben is transformed and then shot off to penetrate Doom's defenses in... er... a giant flyng sperm. 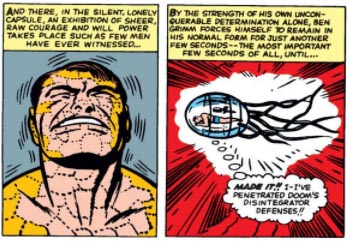 Taken out of context these two images could be telling a very different sort of story, but let us rise above that and enjoy this deliciously tense sequence, with Ben beginning to change back at precisely the wrong moment, managing to maintain his human form for just a few more seconds using sheer force of will. It's a forerunner of the classic scene from Amazing Spider-Man #33, with Peter Parker trapped beneath a giant piece of machinery and only able to extract himself through willpower. This version's a lot quicker, because there's a whole lot of other stuff going on!

Ben destroys the disintegrator circuit that was preventing them all from boarding the ship, allowing his team mates to join him. It's only here, three quarters of the way through the issue, that we get to the building site perils mentioned on the cover, as the three male members of the team are disabled by specially designed traps set just for them. Doom then uses Power Spheres to transport them all into another dimension (why has he never used these before? They sound amazing!) but his victory celebrations are short lived - it turns out that he has only defeated some "flame images", not the real Fantastic Four. 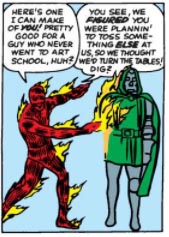 I must admit I'm getting a bit fed up with Johnny Storm's ever-expanding arsenal of ludicrous flame-based powers. How is a "flame image" a thing? It's at times like this that I want Doom to win.

With the plan going awry Doom hurries off to collect his hostage, Alicia, but unfortunately Sue has beaten him to it. There's a great couple of panels here where we see Sue coming in to find Alicia distraught, then a few panels later the exact same view, with Doom creeping up on a disguised Sue. It's lovely! 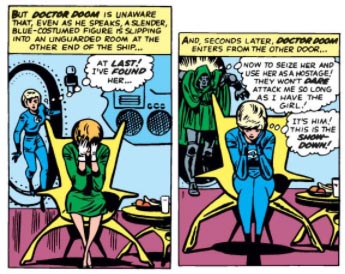 Sue then fights Doom on her own, using her powers, her brain, and judo! It's great to see her fight him to a standstill, continuing the gradual change in her character from terrified hostage-in-waiting to effective team member, although she does still need the men to turn up to save her from Doom's "ultra heat beam".

As soon as they're all together Doom realises that, once again, the jig is up, and decides that running away is by far the better part of valour. This is now a core part of Doom's character, that he will always recognise when he's beaten and decide to flee to fight again another day. If he can do this in a manner which persuades his enemies that he's actually dead, then all the better. That's exactly what happens here as, rather than be captured, he chucks himself out of the airship.

The Fantastic Four don't have time to worry about him, as they're busy reuniting with each other, but we will later discover that's fallen a very long way indeed - into an entirely different comic altogether!