The Micro World Of Doctor Doom

The story inside is called "The Micro World Of Doctor Doom", which is a distinctly less thrilling headline. It begins with Johnny Storm returning to the Baxter Building to find all three of his colleagues "reduced to the size of toys". He saves them from being killed by the Air Conditioning (not an auspicious end to a superhero career) by melting it, after which they all return to full size and, rather sheepishly, all admit that this is not the first time they've shrunken recently. 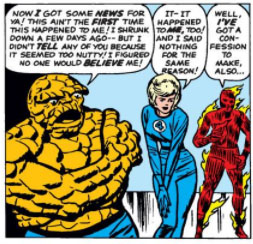 There's some delightfully non-heroic body language here, as it turns out that they were all too embarrassed to admit to having been shrunk in case the others thought they were making it up. This nervousness is despite the fact that something extremely similar happened to all of them about six months ago, when they last met Doctor Doom. The idea that this might have something to do with him doesn't seem to occur to anyone, not even to Mr Fantastic, allegedly the biggest brain on earth. I personally worked it out right away, but then I did see that he was returning on the cover so maybe that was a clue. Or maybe I'm just cleverer than Reed Richards?

There follows several pages of each of them telling their own stories of shrinkage in a jolly sequence that, as Ben says, "sounds like we're playing 'Can You Top This?'". 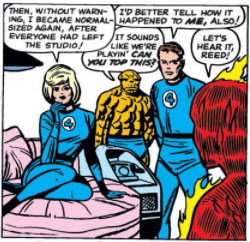 Unable to work out what is causing the shrinking they decide to call in Ant Man, recent star of "Tales To Astonish". This is an early example of Stan Lee knitting together the Marvel Universe as a cohesive fictional storyworld. Whereas other superhero series, existing in their own isolated worlds, would have had to invent a Professor Of Shrinking to explain what's going on, the Fantastic Four are able to call on a pre-existing Shrinking Expert from another comic who happens to live in the same city. This little piece of cross-title interaction happens so casually and quickly that it's easy to forget how revolutionary it was at the time.

Ant Man flies over on a couple of flying ants and lends the team his amazing shrinking/growing potion, which requires one drop to make you smaller, and another to make you tall. This has a very Alice In Wonderland kind of vibe (several years before Jefferson Airplane had a hit with "White Rabbit") but I think that, in this case, it may not be an intentional reference, if only because when it is intended a character will usually draw attention to it! 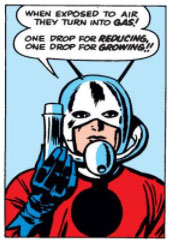 Even though the Fantastic Four have a lot on their plate at the moment, what with the unfathomable attacks from a mysterious unknown nemesis who hates them and uses shrinking rays, Reed Richards still has time to pursue other projects. The next day he pops round to give Ben another potion which, temporarily, turns him back into his human form. Unfortunately for Alicia, Ben was holding up her piano with one hand at the time, so drops it as soon as he's no longer the Thing. know science is exciting, but surely even in the 1960s they had some sort of health and safety awareness to stop this sort of accident happening? 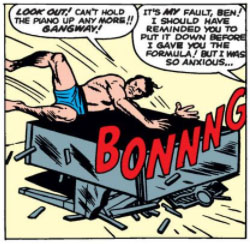 Sue and Johnny are also going about their everyday business - Johnny showing off to school friends, Sue testing out perfumes to see if they disguise her from dogs (that's her story anyway, I think she just wanted an excuse to fill the lab with adorable dogs). 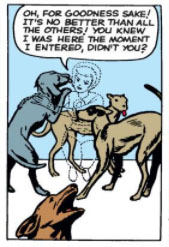 Suddenly they all hear a voice telling them to beware of Doctor Doom, which finally - FINALLY - leads them to suspect that he might still be alive (like he has been every other time they thought he was dead) and behind their recent attacks. They immediately take the shrinking potion and shrink down into another universe - the Micro-World of Doctor Doom! 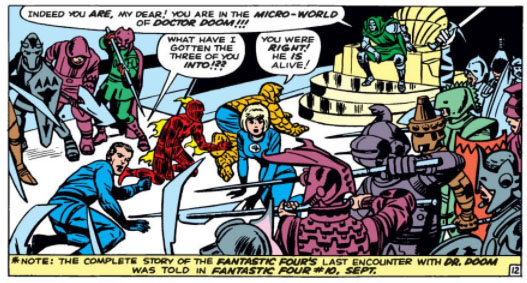 It's taken over half of the issue for the cover star to make an appearance - who said decompressed storytelling was something new? Doom is very Doom-like right from the off, relaxing in a throne, using local people to do his work for him, and eager to fill his enemies in on what he's been up to since they last saw them. He too shrank down to this other universe and found a people living a peaceful, happy life, which of course made him FURIOUS! 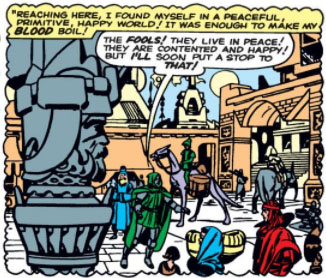 We're still over a year away from learning Doom's full origin, but his adventures in the Micro World are very similar to what we will learn of his history in Latveria. Here, as there, he uses his scientific skills to fool an easily impressed aristocracy. Gradually he takes over a quasi-medieval society, gaining the trust of the locals to help him build his devices, and then takes power for himself. "Conning the masses" is pretty much Doom's main superpower, and he must be really good at it. If someone in a grey metal skull mask calling himself "Doctor Doom" turned up and said he was here to help, you'd think people would see through him. But then again, in the world of Trump, who are we to judge the innocent denizens of the Micro World?

After the usual capture of Sue, followed by everybody being dosed with sleeping gas, the Fantastic Four find themselves imprisoned in a cell inside a lake of acid, along with the King of the Micro World and his daughter, Princess Pearla. Pearla explains that Doom has summoned the Lizard Men of Tok to come and discuss an alliance, and they're arriving any minute!

I love the Lizard Men of Tok, mostly because of their name, but also because of their brilliantly weird-looking spaceship. Pearla then describes, with slightly more gusto than perhaps necessary, the iniquities that will befall her fellow prisoners, with Reed being used as a bridge, Ben as a miner, Johnny as a flame thrower and Sue as... a scullery maid? I'm sure being invisible would be handy for spying, but the Lizard Men Of Tok clearly require a cook more than they do tactical intelligence. Still, is it me or is this a great look for Sue? Not the drudgery, but the hairdo: 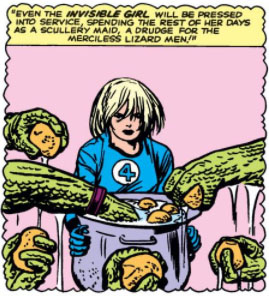 Maybe it's the fed-up expression, but I reckon she looks like a supermodel. 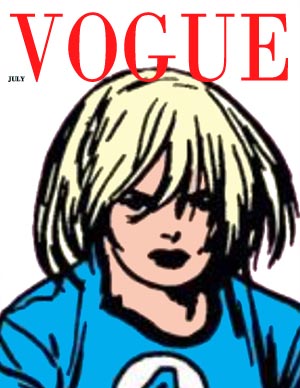 In a nice change from Sue's usual passiveness, this time she's the one who has the brilliant idea of tearing down parts of the acid-proof wall cladding to make an escape pod, and it's Sue who then rescues Ant Man, who came to help but got himself instantly captured by Doom's men.

The rest of the Fantastic Four race to head off the incoming Lizard Men of Tok, which The Thing does rather elegantly by picking up a control tower and using it as a baseball bat to whack them back into space.

It's a great visual, but I must admit to being a bit sad that we never got to meet them. Come back soon, Lizard Men of Tok!

Back in the throne room it all kicks off, with Sue stealing Doom's gun and Ant Man duffing up the army. Doom knows the jig is up, so runs away, using his own shrinking/growing device to boost himself up to our universe once again. All that's left is for Johnny to say goodbye to Pearla, who wanted him to stay, and then to head off to the next issue, where Doom will be waiting! 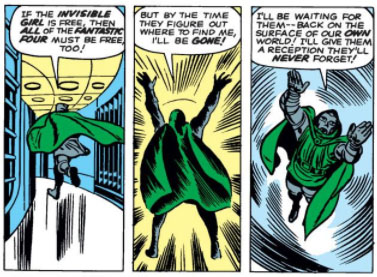 "But then again, in the world of Trump, who are we to judge the innocent denizens of the Micro World?" So now Jordan Peterson is Red Skull and President Trump is Doctor Doom? Trump Derangement Syndrome strikes again. You people are sick, sick, sick.
posted 15/4/2021 by American