This is another brief Doom cameo, with him appearing only once in Fantastic Four #14 on The Puppet Master's mental list of all the Fantastic Four's enemies. 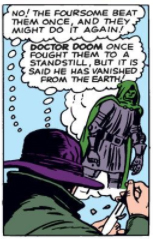 The rest of the story is not what anyone would call a classic, not least because of the eye-watering sexism that goes on throughout. It begins with the team returning to base, knackered from their previous adventure. Once they get in the men sit down to relax while Sue goes off to do some cleaning. "That's fine, as long as you do it in silence", says Reed. 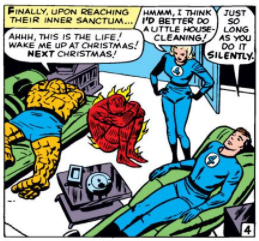 That's nice isn't it? Reed continues to be a complete git throughout the story. For instance, shortly after this incident he writes up some of his scientific thoughts and then hands his notes over to Sue to type up for him, because clearly this is woman's work. 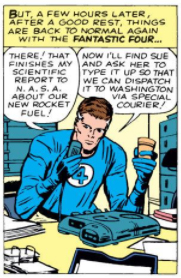 Reed isn't the only misogynist in this story, with Ben later complimenting Alicia on being the only woman he knows who is able to keep quiet. 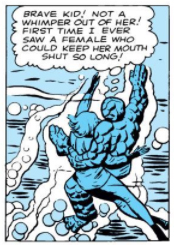 This is all while they're on a mission to save Sue, who has been taken hostage yet again as a consequence of her darned female weakness for the near naked body of the Submariner. It is, to be honest, a bit alarming. I know this was all published over fifty years ago, but the extent of the misogyny throughout the issue is still quite surprising.

The plotting is completely all over the place too, though at least there's some humour about it. For instance, when The Thing sees Sue guarded by a Giant Octopus he remarks that he wouldn't have believed it if he'd read it in a magazine - a technique that I believe the critics call "lampshading", where attention is intentionally drawn to an implausible plot point, in the highlighting it will excuse it. 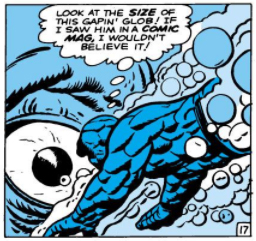 Another example is the Puppet Master's cunning scheme, which is to use mind control to force the Submariner to destroy the Fantastic Four for him. The reader would surely be thinking "Why doesn't he just mind control them and get them to kill themselves?" and the Puppet Master answers this question halfway through, almost as if Stan Lee suddenly realised that there was a gaping hole in his plot. 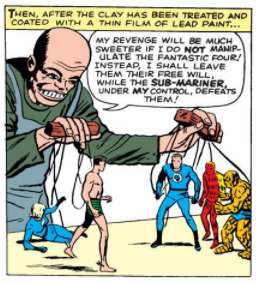 There's also a lovely scene where The Thing goes to park the Fantasticar and gets stung by a parking attendant who doubles the ticket price because he can see he's in a hurry. It's a great example of Lee and Kirby's innovation in setting fantastical events in very real world settings.

Unfortunately none of this humour makes you forget quite how unpleasant some of the gender politics is in this story, so let's hope there's less of it when we regroup for the next blog which features the second (but definitely not last) Return Of Doctor Doom!