I had an epic journey to get to Walsall on Saturday, as various LINES were down. THUS I had to get my usual train to St Pancras, a tube to Baker Street, walk to Marylebone, get a train to Birmingham Moor Street, walk to New Street, and then get another train to Bescot Stadium. Incredibly, every leg went perfectly, and along the way I saw one of the GRATEST pieces of Public Information EVERm at Moor Street station: 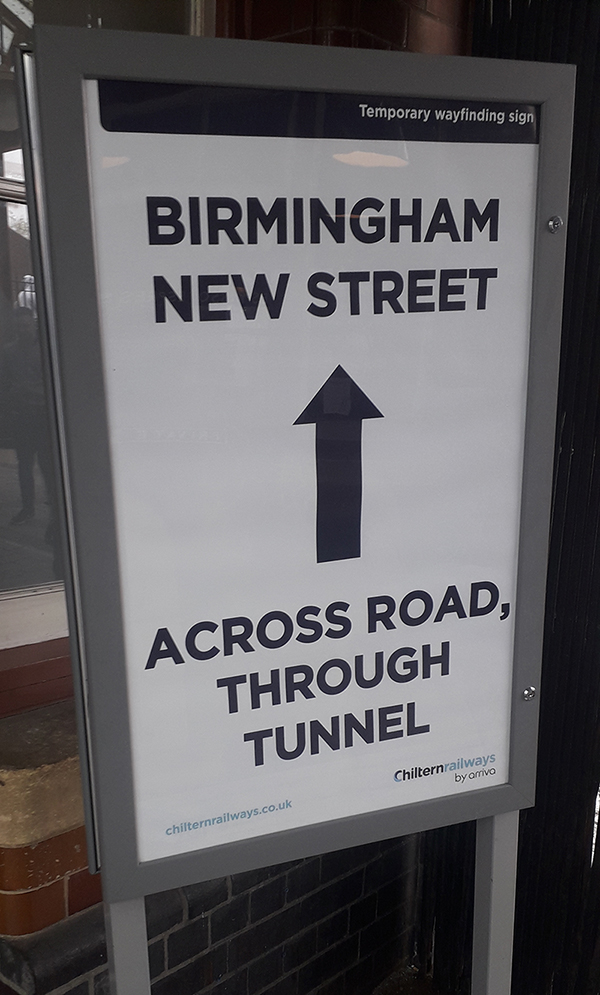 That's exactly where it was! It must have been SO tempting to put "To facilitate access to services departing New Street passengers are advised to traverse..." (ETC ETC ETC) but just "ACROSS ROAD, THROUGH TUNNEL" totally did the job. Well done Chiltern Railways!

I was doing all of this travelling in order to perform Hey Hey 16K at the Spectrum 40 event, following on from my previous attendance at Spectrum 35 and Spectrum 30. This time it was being held in The Stadium Suite at Walsall football ground, which meant you got a great view of the pitch and also access to the stadium chippy stand and toilets! I arrived to find the event in full swing, with The Oliver Twins on stage talking about the "Dizzy" series of games. I must admit I was a bit hazy on this, as their games came out when I'd gone off to Poly and stopped buying new games, but after that we got a screening of Will Brooker's ZX Spectrum Experience film. It was GRATE - althougb for some reason the bits with ME in had been augmented using - I ASSUME- sophisticated CGI technology to enlarge my delicate nose into something quite NOTICEABLE. I'm not sure when or where the film is going to be officially released, but I would VERY much advise having a look when it is, and you can see a preview HERE:

By this point my avowed intent NOT to have a drink before going onstage had rather fallen by the wayside, and I was wandering about having a chat to various people, notably Ms E Pemberton who'd come along especially, and Mr L Fogarty, organiser and Person Who'd Booked Me. We'd agreed that I'd go on after the raffle (the BEST support act), but when it came to it there were two small problems: there wasn't a stand for the microphone, and there wasn't an easy way to plug my guitar into the PA. Luckiliy I HAD had a couple of pints by this point, so I just got the microphone, said "HELLO it is ME I am now going to SHOUT" and then just did Hey Hey 16K without PA. It seemed to work out OK, but I'm glad I didn't have to do more than one song, my throat is a bit out of practice these days! You can judge for yourself, HERE:

“We bought it to help with your homework…!” 😂🕹👍🏻#ZXSpectrum #spectrum40 #retrogaming #walsall pic.twitter.com/QE7Iyc5LDi

After that I spent the evening talking to various people and being MOVED by how LOVELY they all were. It was really nice to be able to mooch around a room full of people with a similar interest, but who also had LIVES and THORTS and were all-round DELIGHTFUL. An absolute highlight for me was talking to Sandy White of "3D Ant Attack" fame. I asked if I could have a picture with him, and to my surprise he said "I was just about to ask you the same thing". Sometimes you meet someone and thnk "But you're really nice, can we have a pint please?" (INDEED now that I think of it I have done written a whole song about it) and this was very much one of those occasions.

I must admit, earlier in the day, I'd been a bit WARY of the idea of spending approx FIVE HOURS to go somewhere to play ONE SONG, spend the evening in a hotel, and then travel all the way back for, but it was TOTALLY worth it. I suggested to Lee that they do "Spectrum 48" next, and hopefully I'll get invited back!