Regular readers of this here blog will recall that a couple of days ago I was singing the praises of sewing on a button. "Surely this is Hibbett's limit for taking joy in the quotidian?" they may have thought. "After this it is bound to be High Minded THORTS all the way?"

Well, yes and no. For LO! Today I wish to remark upon an AMAZING facet of THE SCIENCE FICTION FUTURE that I have only recently become aware of but which others may regard as Old Hat: CONTENT AWARE FILL.

This is a facility in Photoshop where you select an area of an image and let Photoshop fill it in for you, using the surrounding area as a guide. It's like if you want to remove an item from a photograph, but there's a complicated backrgound behind that would need replacing. Now, I have seen VIDEOS over the past few years of this being done on, for instance, HOLIDAY SNAPS where you click a button and the programme replaces An Annoying Ex with Realistic Sand And Waves, but I always thought that that was just exaggerated for demo purposes, and that actually it would just copy and pasted whatever was next door to it.

How wrong I was! It turns out that it WORKS, like SPACE MAGIC!

I first realised this a few months when I was told that we couldn't use the usual cover image for the People Are All Right EP on Spotify, because they don't allow web addresses in the visual. I sighed, the began the laborious process of covering up the offending URL by moving slices of colour from nearby, but it looked crappy and was taking ages, so I thought I'd look up this content aware thing. "Maybe it has got a bit better in recent years?" I thought, without much hope. Thus, I selected the area I wanted to change, clicked the "Content Aware Fill" option and... CRIKEY! It only bloody WORKED!!

Before And After Computer Trickery


It's not perfect, but JIMINY CRICKET it's pretty good isn't it? I've also been using it for some work on my PhD, altering an image of Doctor Doom (OBVS) to show what he might look like without some aspects of his appearance. This is what I came up with! 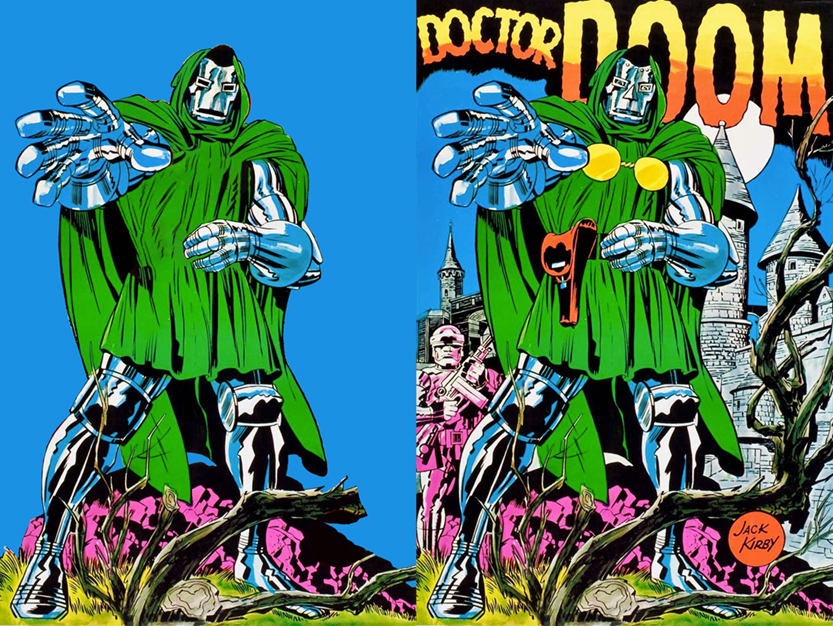 
Again, it's not perfect, and there was quite a bit of messing around by me to remove the castle and so on in the background, but CRUMBS look at the way THE ROBOT BRANE removed the nose from his face, and especially how it added its own creases and even a SHADOW on the tunic section! It's AMAZING!

Of course, the DOWNSIDE of all this is that PERNICIOUS ACTORS can also use this kind of technology to do these DEEP FAKES that we hear about, so that you can't really trust ANY image that you see EVER anymore, but still, it's bloody clever isn't it? HOORAH for our imminent Robot Overlords!