On Saturday myself and The Waves In My Sea headed SOUTH to distant Brighton, there to attend a gig by Mr G Osborn And The Comment Section. It was the first gig either of us had been to in over six months and (SPOILERS) it was dead good!

We went on the Thameslink from St Pancras, an EXCELLENT service that completely avoids any need for catching the tube and is Actually Quite Nice, especially as we went and sat in First Class, breaking ALL the rules like the crazy rock and roll rebels what we are. When we got to Brighton we found that it was very much Still Brighton, with all that that entails, and indeed quite BUSY. As we walked down towards the beach we found that some of the lanes in The Lanes were RAMMED with people, so we ended up going quite a wiggly way to get there.

For LO! the gig was happening on the beach itself, as part of The Warren Outdoors festival. This was a HIGHLY impressive operation, where they'd set out Socially Distanced picnic tables on a fenced-off area of the beach, with a one-way system all around, loads of hand sanitisers, and a booking form for getting drinks that ACTUALLY WORKED. The staff were LOVELY, the sound was GRATE (we had individual speakers on the ends of our tables!!) and the whole thing was AMAZING. I, of course, was fully accepting of the prospect of New Ways Of Working before we'd arrived, but if I HAD been saying things like "why can't we just go to the bar? why do I need to go the long way round to the loo?" beforehand I would definitely NOT have done so once I experienced the place itself. It was excellent!

The gig, meanwhile, was BLOODY WONDERFUL. We have seen Gav play approx 100,000 times and part of the reason for that is because he is BRILLIANT every time, especially when, as here, he is accompanied by Mr J Hare on All The Instruments. I was most impressed to see that he has managed to inveigle John into doing some of the INTRODUCTIONS too, which allowed Gav to have the occasional DRINK break as necessary. The Validators have never got on board with this idea, although thinking about it this may be a deliberate ploy to reduce the aforementioned drinks breaks.

As the gig progressed Gav mentioned that his voice was starting to go - earlier on we'd heard them soundchecking their version of It Only Works Because You're Here, and I did half think to myself that in an EMERGENCY I could always HELP OUT (in a helpful way) by singing the words for them, but I was still a bit surprised when Gav invited me on stage to do EXACTLY THAT. So I did! 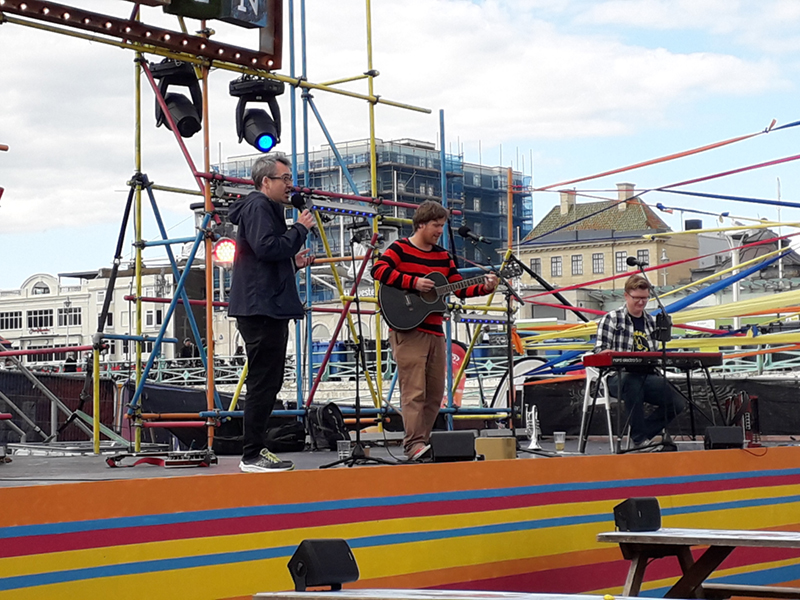 (picture courtesy of The Lens In My Camera)


Let us be clear here: he did ask me, I didn't just elbow my way onstage, honest! It was an HONOUR to do it, and I think it went OK, but it was also a bit TERRIFYING as I had had no idea it was going to occur and had not SUNG the song for MONTHS. When it was done I FLED the stage and tripped over Gav's banjo too, but thankfully the rest of the gig went off without further hazard or interruption!

When it was all over we joined fellow audience members Mr T Eveleigh, Ms H Zaltzman and Dr M Zaltz Austwick for CHIPS AND MUSHY PEAS BY THE SEASIDE (AMAZING) and then also by the performers for a REAL LIFE NATTER which was thoroughly lovely, not least because it was the first time we'd been involved with a Sit Around Chat in a larger groups for MONTHS. There was further RULE BREAKING when John went to get a round of drinks and I went to help him. We were told that we couldn't take our drinks out through the exit, so I walked THE LONG WAY round the venue so as not to get DONE. I thought this was VERY clever and brave of me, until I realised that this involved walking quite a long way along a pebble beach on a SLOPE. My hands smelt of CIDER for some time after!

We said our farewells and then headed off along the beach for a STROLL. We were aiming to do The Undercliff Walk, but we only got as far as the start of it, at Brighton Marina, before turning back. Brighton Marina is a WEIRD thing - it looks like a Gerry Anderson supervillain base reconstructed on Blue Peter and then reconstructed from THAT in real life. I'm sure it's built on concrete loo rolls.

The rest of the walk was FAB though, and seeing the sea was LOVELY. It was, in fact, a bloody brilliant day out, and a lovely reintroduction to the world of GIGS! Well done, everybody!!