On Sunday I staggered round to Tottenham to visit The Hewitts. I say "staggered" because I was returning Steve's TENT what he had kindly loaned me last summer - I had originally planned to use it for the Towersey Festival but had then noticed that Travelodge's NATIONAL OFFICE was about 15 minutes walk from the site (and had a hotel attached too) so stayed there instead. Sensible!

The tent returnage was not my main purpose, however. Last week I started filling in our info for when we do Still Valid at the Camden Fringe, and realised that we didn't really have any appropriate pictures. We couldn't really use the ones we'd had for previous shows as a) most of them featured props etc from those shows and b) Steve now has a VOLUMINOUS beard, so we decided to capture his hirsute magnificence in a new SHOOT. This entailed a thoroughly enjoyable ten minutes of Meg snapping away taking pictures whilst her husband and I pulled faces and mucked about. We got some pretty good photographs in the end, with THIS one being my choice for the Camden booklet: 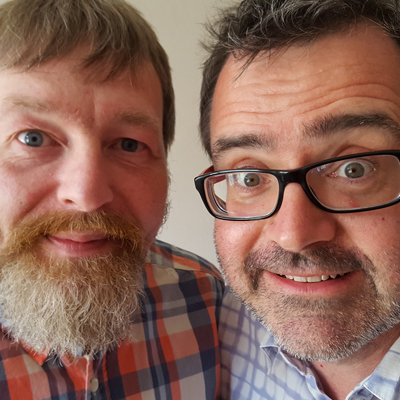 I reckon any sane person would go and see that show based PURELY on the picture!

We also discussed a RANGE of vital issues including NOT doing The Buxton Fringe (the place we were supposed to be playing let us down last week, and everywhere else is now booked up), possible other places to play, and BEER, with Steve very kindly giving me a carrier bag FULL of it (contained within bottles, fear not).

All in all it was a very successful SESSION, which will hopefully make it PEASY to provide publicity stuff for the next year or so of shows. I just have to hope that Steve doesn't SHAVE!