The Summer of ROCK continued at the weekend as The Validators travelled NORTH to play at Festival 8, just outside Grimsby. Executive Summary: we had a lovely time.

I met up with Mr T 'The Tiger' McClure and Ms C Birkby the night before at the Grimsby Premier Inn, our base for the weekend. Everyone there was VERY friendly, apart from a barman who, in his defence, had spent the previous 2 hours dealing with a pub full of CHILDREN. Apparently everyone else was there for EITHER a junior football tournament OR something to do with BALLET, so there were a LOT of kids!

On Saturday we headed over to nearby Cleethorpes to collect Mr FA Machine from Cleethorpe's BEST, also Cleethorpe's ONLY, real ale pub, where he had taken a ROOM. On the way he texted to ask if we had time for a BEER there. My BRANE clicked over into TOUR mode: of COURSE we did - I texted back "3 pints of lager and a coke please" then added "Everyone else can buy their own" because I am ENTIRELY HILARIOUS. Nobody laughed when I repeated the joke several times over the weekend, I can only assume this is because it was TOO hilarious.

Post-pints we got ourselves rounded up and headed to Cabourne Parva, where the festival was taking place. It's theoretically a FARM but seems to be used for lots of events, as the PARTY BARN where we were playing (they're ALL party barns when WE play them etc etc) had a bar installed and floorboards, and there seemed to be several permanent structures for cafes and suchlike. There were also LOTS of tents and big tops, mostly of a ETHEREAL theme e.g. yoga, healing, that sort of thing. 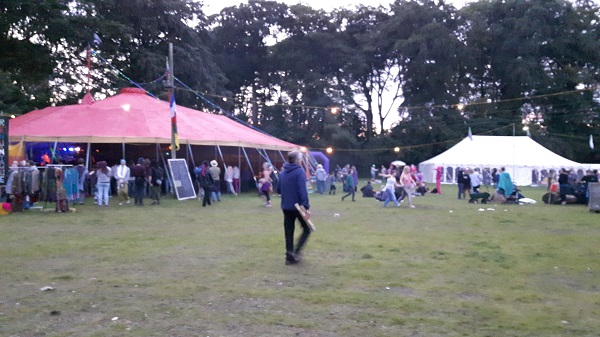 It reminded me VERY MUCH of Glastonbury in Olden Tymes when I used to go or festivals in general from back then, there was a LOT of juggling, pantaloon trousers, dreadlocks and so forth going on. As with festivals of yore, it was also a VERY friendly, VERY safe atmosphere into which we relaxed like the old hands we are.

We found Mr E Bewsher, long time CHUM and the person who suggested we apply, outside the PARTY BARN and then The Pattisons INSIDE. They were watching the act before us so we all stayed to watch too. 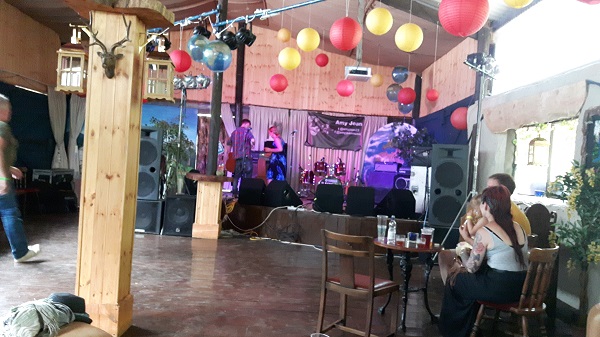 Soon it was time to go and collect GEAR ready for SHOWTIME. When I got back I was told to report to the Stage Manager, who wanted "some words to describe you for when I do the introduction." "International Indie ROCK" I said, which seemed to please her, although I think maybe she had read a handwritten version of the running order, as she introduced us ON and then later OFF as "MISTER Hibbett And The Validators". I reckon it sounds quite sophisticated! Here's what we played:

It was All A Bit Crash Bang Wallop to start with but we soon relaxed into the gig, and I remembered that a large part of the fun, for ME at least, in doing Validators gigs is the opportunity to BICKER with Emma. There was quite a lot of said bickering and I am now convinced that That Guy is her FAVOURITE song and she just says it isn't so that we can argue about it. We didn't have a HUGE audience, but the people who were there seemed to enjoy it and I did get to have a debate with one gentleman about which end of Lincolnshire is the flattest!

We'd intended to finish with Easily Impressed but there seemed to be a slight misunderstanding about our set length (we thought 45, the schedule apparently thought 40) so we had to cut it off, though it ended up being quite SUITABLE ending with We Did It Anyway. As was said several times over the course of the day, other indiepop bands might be playing the Fortuna Pop! weekender that day or will be playing Indietracks in a couple of weeks, performing for audiences who've come specifically to see them, but we're the only ones playing in a Barn near Grimsby! I genuinely think ALL bands should do more of this sort of thing - it's fun playing to people who probably like you already (actually, it's a LOT of fun), but you've got to get out and about to find NEW people!

With that all done it was time for the main business of the day i.e. finding some SEATS and then sitting drinking BEER and YACKING for the next four hours, which we duly did. It was GRATE! Tom found himself elected to a new POSITION i.e. The One Who Asks About Money, and he fulfilled this task SO well that it has now become a permanent role. Congratulations Tom! He even managed to get us some BEER VOUCHERS, so it was a fairly DELAPIDATED group of Validators who staggered off to the campsite at approx 9:30pm to enjoy a final group discussion while sharing a bottle of WHISKY.

It was, basically, a lovely way to spend a weekend - thanks VERY much to the organisers of Festival 8 for having us, we really enjoyed it - and it was made all the lovelier by the knowledge that in a few days time we're all back together AGANE to ROCK Leicester (supporting Po! at The Firebug)! HOORAH for The Summer Of ROCK! 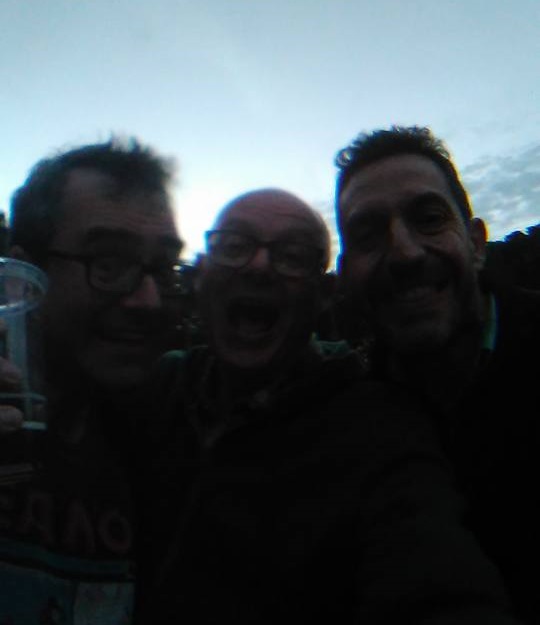