After leaving the post-Hibbettfest pub on Saturday evening I headed to Birmingham New Street Station (which despite the new shopping centre plonked on top is still Hell On Earth) to catch a train to PETERBOROUGH, where I was due to attend and also perform at Mr CM Smith's retirement DO. I was stood on the platform looking at twitter and, after about ten minutes, realised someone was stood next to me. It was Mr Mark Collins! "I've been stood here for ages!" he said. In my defence there'd been a LOT going on in The Politics, which we then went on to discuss all the way to LEICESTER, to which he was returning.

After Mark had disembarked I went to the LOO to get changed - it had already been a long day and a change of clothes was very much needed. Of course, this being a MODERN TRANE it had a toilet with a very confusing LOCK and, OF COURSE, the door flew open at the worst POSSIBLE moment for such a thing to happen, though luckily for me (and any observers!) no-one was there to witness the moment of HORROR. Phew!

I arrived in Peterborough just as planned and, a few minutes later, so did The Points On My Plan, who had come direct from London. We hopped into a taxi and were soon in HELPSTON, at http://mjhibbett.co.uk/gigs/venue.php?venuecode=383>The John Clare Cottage where the DO was being held. My MUM works there sometimes so it had seemed like an logical place to have it.

What followed was a DELIGHTFUL evening. Various family were there and some LOVELY old friends including Mr S Carter and The Mylands. They'd also laid on SPECIAL food just for me and The Meals On My Menu, which was MOST appreciated, especially next day when we ate the leftovers out of tupperware!

There was catching up, there were presentations, there were speeches, and also there was ME doing a few songs. I wasn't really sure, beforehand, whether this would be a good idea but when it came time to DO it I realised that I'd just COME from one gig in a back garden so another one should be no bother at all. ALSO it gave me a chance to boss around an audience featuring many of my parents' friends, which was MOST enjoyable. Here's what I did:

Can you spot a theme? "Boom Shake The Room" seems to have become a FAMILY TRADITION now, and I was aided by Mr P Myland, formerly of The Durham Ox Singers on Backing Vocals, as you can see below: 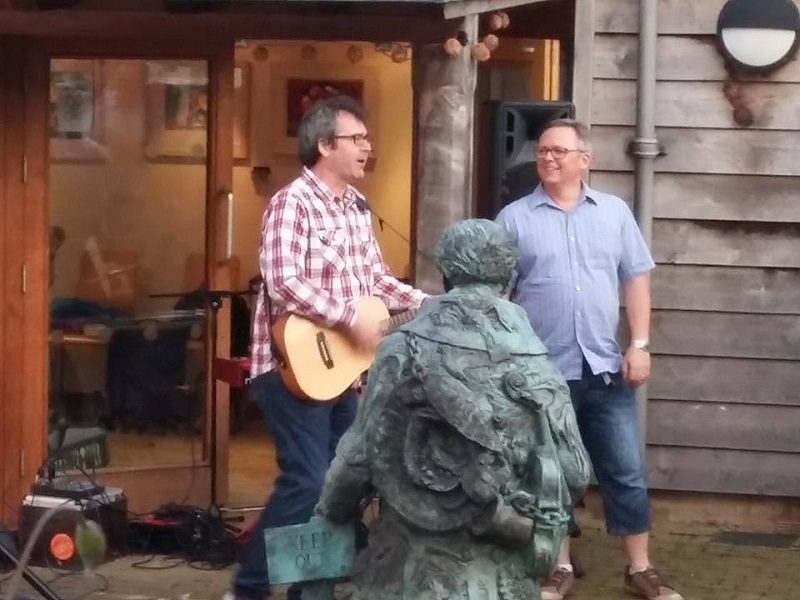 What a team! And also: what a night! I must admit that when PLANNING this ludicrous day of travel ACTION I'd expected to be EXHAUSTED by the time we got to Helpston, but actually I had a LOVELY time. That may have been helped by the BARRELS of Oakham JHB that were laid on (that is a NICE beer), I cannot say. What I CAN say however is that it caught up with me next day - even if the Euros Final had been INTERESTING I'm sure I would have dozed off, in the state I was in that evening I stood NO chance!