There is a big international tournament of team sport going on that the whole WORLD is enjoying at the moment - I speak of course of The Hockey Champions Trophy 2016! Whoo!

Yes all right maybe there is ANOTHER international tournament of team sport occurring at the moment and MAYBE I am diligently filling in my Radio Times wallchart every night, but that one isn't happening ten minutes away from my front door at the Lee Valley Hockey and Tennis Centre. The hockey very much IS!

The Curve Of My Hockey Stick had got us tickets a while ago and I must admit that, as we set off last night, I was kind of wishing we could have stayed at home and watched the FOOTBALL on TELLY. These doubts, however, soon began to dissolve when we arrived to find that it was like a tiny bit of the OLYMPICS brought back to life. This was partly because the only other time i've watched hockey was when we WENT to the Olympics, but it was also because of the atmosphere - lots of people wandering around, some looking puzzled, others VERY excited about seeing THEIR sport, lots of temporary structures holding exhibitions, shops and cafes, and everywhere you looked volunteers EAGER to help out. It was lovely!

After a quick wander round and an even quicker look in The Museum Of Hockey we found our way into the stadium just as the New Zealand National Anthem was playing. I thought this was HANDY as it meant we could edge along to our seats, but The Words In My Song suggested we go and sit on one of the bank of empty seats in the other direction instead, so we found ourselves with GRATE seats right in the middle of the stand just in time for the British anthem to boom out.

For LO! we were there to watch Great Britain play New Zealand and it was, all in all, jolly good fun. We weren't quite sure what was going on for large portions of it, but things moved so quickly that it didn't really matter and by the end we were both shouting "GO ON!" whenever one of our "girls" got close. It was, in fact, very much like going to watch Posh, not least because we were sat almost EXACTLY where Mr P Myland has his season ticket! There were also long periods of The Mind Wandering, occasional bursts of SHOUTING, and also people nearby making REMARKS to each other under the impression that they were Wise Commentators. 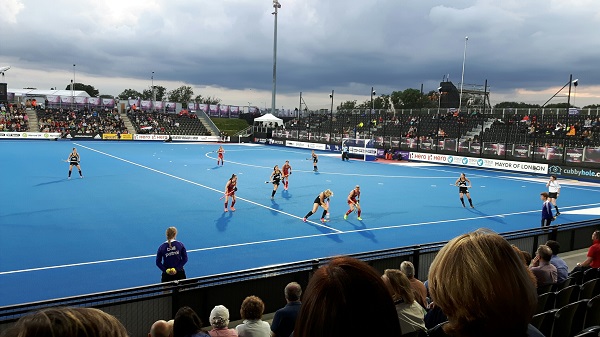 The differences were a) everyone was quite a bit posher than at football and b) it was a LOT slicker. Whenever somebody got BOOKED they played "Trouble" by Shampoo LOUDLY through the PA system (which did not give it the air of a Serious Offence), other music played at appropriate (and occasionally inappropriate) moments, and CAMERAMEN kept running onto the Actual Pitch to film things. We agreed it was sort of like how you'd imagine American Football being, except on a slightly smaller, and more English, scale.

It was all GRATE fun, even though GB lost 1-0. "They have the same problem as England" remarked The Pundits In My Panel. "Lots of pressure but they can't score." She wasn't wrong!