In the run-up to the release of the past couple of albums I've had some Promotional Postcards made. When I first did them, for Regardez, Ecoutez Et Repetez, the plan was to post them out to DJs and so forth to tell them the album was on the way, but that didn't really happen did to STAMP COSTS. Instead I used them for writing NOTES when people bought CDs, which was SUPER handy - I always like to put a NOTE in when somebody buys something, but used to have to get a scrap of paper to do it on. Now I looked SLICK... or would have done, if I hadn't accidentally done the postcard THE WRONG SIZE i.e. twice as big as they should have been, so ended up having to cut them in two to fit into jiffy bags!

So when Dinosaur Planet came along I was VERY careful to get them the RIGHT size. They looked lovely, and I used them for sending out promo AND purchased copies. I got LOADS done so, over the following years, was able to use them for all sort of other things too. I'd like to say this was an exercise in cross-promotion, highlighting a past release while promoting future ones but actually I did it because I LIKED them so much.

Eventually I'd used them all up and so wondered whether I should do MORE for Still Valid. I had a couple of thoughts about a design but it never looked very exciting - the cover image looks AMAZING and BIG on the CDs, but on the postcard it just looked like more of the same. I spent ages puzzling over it until eventually realising that I could use the INSIDE of the CD instead! The image therein is a thing of GRATE beauty and interest and it didn't take long to get it designed, off to the lovely people at Saxoprint, and a week or so later back in my flat looking like THIS: 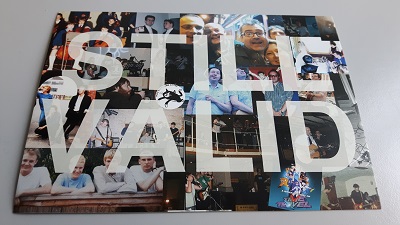 NICE isn't it? As I say, these'll be going out with all copies of the album bought online, OFFICIALLY from July 4 but also SECRETLY for newsletter subscribers a few days earlier. Only a few weeks to go now, it's going to be GRATE!

I still use the Dinosaur Planet one as my bookmark. Made all the more special because it was addressed to someone else! I'm sure there's someone else out there treasuring their postcard addressed to me...?
posted 2/6/2016 by Gareth W