We had a LOVELY time last week in Mallorca - it's something like the 10th (or 11th) (or 12th?) time we've been, and though many things remained the same this time there seemed to be an ABUNDANCE of WILDLIFE.

The first example of this came before we'd even left the UK. While waiting for the plane at Gatwick we noticed a group of five MEN enter the departure lounge, causing a WARP in the space-time continuum as they sat together. It was that thing where everybody suddenly notices a change in the atmosphere - nobody was aggressive or unpleasant, but the sudden increase in Forced Laughter and Remarks made everyone look up and NOTE them. "It's just some blokes off on holiday", I thought. "Some of them have grey hair, they won't be lairy."

Our plane was late boarding as, apparently, there'd been some baggage trouble at Naples or something, and as we sat down the Captain announced we'd missed our flight window, so MIGHT be waiting over an hour. BOO! I didn't want to be spending that long on a plane ANYWAY, least of all with a group of LADS who, while still not aggressive, were getting LOUDER. The Jackal Call laugh of the least important LAD (you know the sound, it's always there) was starting to get VERY annoying!

A few minutes later the Captain came back and told us he'd arranged another flight path and we could take off after all. HOORAH! We taxied round... and kept taxiing... and kept taxiing, and just when I was wondering if maybe we were heading to HEATHROW or something he came on again and told us that we were heading back to the terminal so that some people who had done something ILLEGAL could be taken off the plane! Everybody looked around wondering who it was, and pretty much everybody looked at the aforesaid group of blokes. They didn't seem too bothered though, so it remained a mystery until we got to the terminal, steps were attached, and THE POLICE entered the plane! 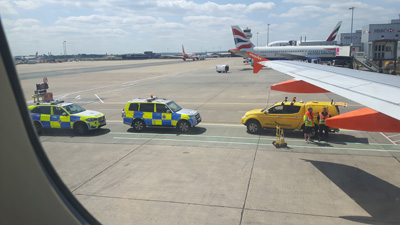 
It turned out it WAS that group of blokes, who it seemed had been necking BOOZE they'd bought in the airport. The stewardess had asked them to stop, they hadn't, and so they got kicked off! At first it seemed maybe a bit harsh, but then the Captain came out again and explained that they were taking a firm line on This Sort Of Thing - when they'd previously given people the benefit of the doubt situations had invariably ESCALATED, with assaults, arrests, and forced landings. He apologised for the delay and we APPLAUDED!

The rest of our journey was incident free. When we got to Mallorca we'd ordered a TAXI to take us to Port de Pollenca where we stay - usually we get a BUS and then another BUS but this time we thought we'd try out the taxi, and it was ACE! It was one of the nicest car rides I've EVER had - super spacious, super speedy, and he played Frank Sinatra's Greatest Hits all the way there!

When we got to our usual place we found they'd given us Our Usual Room - it's not ALWAYS the room we get, but we always ask for it! - which, despite having been painted WHITE and getting some fresh furniture, was pretty much the same as it always was. It's got a view of a POND from which we could watch a fascinating character who came to be known as The Contemplative Duck. 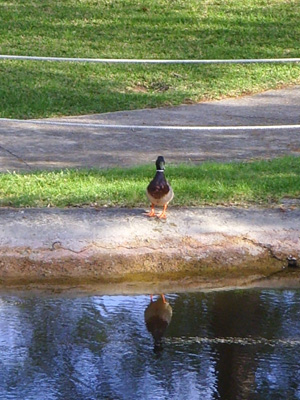 
He seemed to spend most of his time sitting by the side of the pond, gazing out, contemplating the universe. Sometimes people would walk past and he'd gently ease himself into the water, float to the centre, and wait until the coast was clear, just sitting quietly and thinking. Once or twice a female duck would come and be Significantly Busier, but mostly it was just him, contemplating. He was an inspiration to us all.

Also of note were the TERRAPINS. For years we'd sit on the balcony of our apartment looking at people standing on a small bridge, looking at something in the ponds. "What ARE they looking at?" we'd wonder, and then LAST year we found an answer: there was a TERRAPIN! 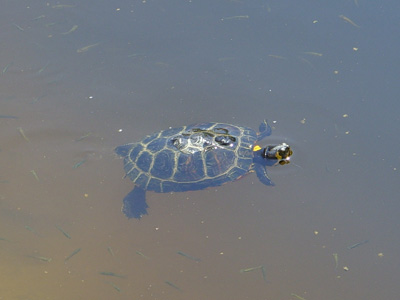 
This year there were at LEAST three of them - that's how many we saw together anyway - it was BRILLIANT! Sometimes you could see them from our flat, BASKING on the other side of the pond from The Contemplative Duck. If you were REALLY lucky you could see two of them together with THIS character: 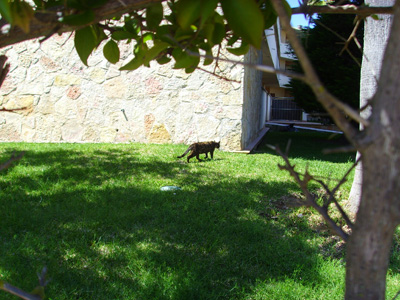 
"Meow Meow" was so-named because of the RACKET he made. If you couldn't hear him you could usually see him. There were a few cats around, also this DOG who wondered about with the air of an INSPECTOR, doing his rounds, checking everything was in order. 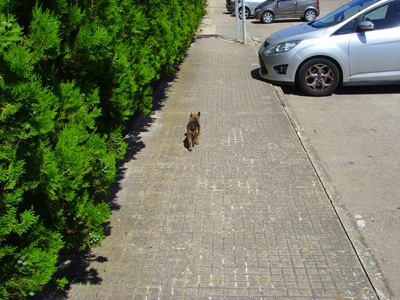 Out and about there were yet MORE creatures. We saw a HOOPOE (which looked like a small child had drawn a bird and it had come to life), a whole HEAP of FISH (which at one point SURROUNDED me so I had to FLEE from the SEA) and a whole field of FLUFFY GOATS, thus: 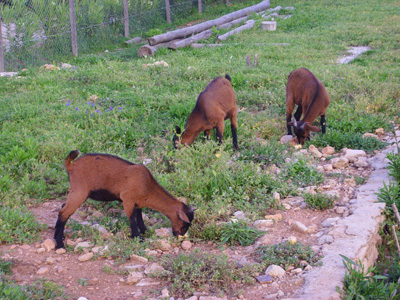 
With all that going on we didn't really have time for much else, apart from eating LOCALLY SOURCED FOOD such as coca, cakes, beer, paprika crisps and BISCUITS, and lounging around generally. It was bloody brilliant - roll on next year!

The Contemplative Duck - either a great song title or the first entry in the MJ HIBBETT KAMA SUTRA...
posted 24/5/2016 by Merman