Saturday found me in Farringdon this weekend, in the old offices of The Guardian which have now been turned into a) some other offices and b) THEATRE SPACE. It's basically some rehearsal rooms which they've converted from offices by taking most of the furniture out and... er... that's it.

I was there with Mr John Dredge to film some MORE material, this time accompanied by Andy of Ah Gee Productions who was going to FILM it for us. This was all very new and exciting, as we've done everything ourselves before but this time both of us were in the films AND there was talking, so we needed someone with proper GEAR.

We arrived at Theatre Delicatessen to find that not an awful lot had changed since it had been offices, which was EXCELLENT for us as one of the two SKITS we were filming was set IN an office. INDEED when I'd rung I'd asked for the most office-y looking room they had. It felt a bit odd at first that they really were just empty offices, but then I guess for a THEATRICAL rehearsal room that's fine - it's not like a ROCK rehearsal room where you need a drum kit and PA and soundproofing, all you need is SPACE. It fair took me back to me and Steve's first rehearsals together in my old office at Birkbeck!

We got set up and got ON with it, and it felt a bit strange to be Just Acting this time - for previous filmings I've mostly been bossing John about from behind the camera, but this time it was Just Acting. The last time I did anything like this was over a year ago when we made the "Christmas Party" webseries and I remember that being EXHAUSTING, much as THIS all was. It should have been peasy, as I was sitting down all day occasionally saying things, so maybe it is all the BRANE POWER that wore me out that time and also this. Spending two hours CONCENTRATING on a) my lines b) moving my face correctly c) not saying other people's lines and d) pretending to be surprised every time you hear a line as if it is NEW took a lot of THORT!

Another handy thing about the location was that it was full of all sorts of various FURNITURE which we borrowed for Set Dressing. Here's a picture of me and John pretending to be in a TV studio for the second film: 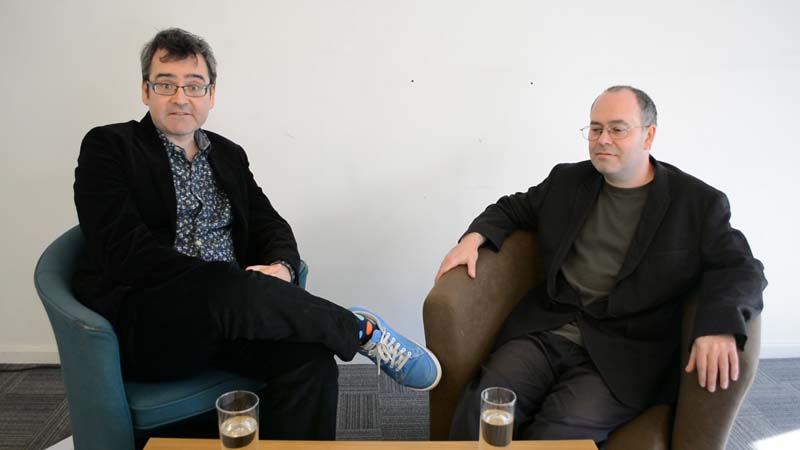 As you can see we are both wearing METHOD TROUSERS. After a couple of hours it was all done and transferred over to my laptop, ready to be taken home and made into two more films. It looks pretty good, FILM-wise, I must say, though I am a bit nervous to actually watch the ACTING. John's is really good, but mine looks a lot like a man concentrating!