Blog: Back For Badges At Bally

On Monday evening Steve and I gathered back at Bally Rehearsal Studios to kick off the grand 'Hey Hey 16K' campaign of 2015. It's only a few weeks until we DEBUT the show (in a "work in progress" hem hem version) at The Leicester Comedy Festival (tickets very available!) so Steve DRAGGED himself (BRAVELY) out of his poorly bed and we had a bit of a practice.

We're trying a NEW PLAN this time, in that instead of doing the whole thing from start to finish every week without stopping we're doing PART of it several times over. You know, like other people do. It seemed to work - I could FEEL my BRANE filing it all away and, once again, I thought "You know what? This is quite good!"

The rehearsal also featured Steve being shown not one but TWO delightful aspects of the show - firstly a PROP that LIGHTS UP (we are ready for the West End already!) and secondly the BADGES. THESE badges, in fact: 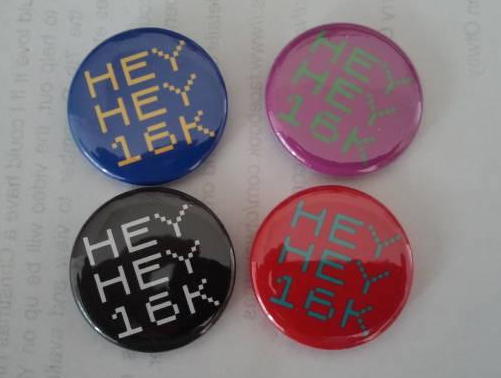 Nice aren't they? As ever they were made by the MARVELLOUS people at Wee Badgers who i would HIGHLY recommend to ANYONE as they are ACE!

You'll be able to get the badges at ALL our forthcoming shows, and we'll have a bit more news on those soon as I'm hoping to get a new version of www.heyhey16k.com sorted out in the near future. In the meantime the practices go on - latest news is that we've booked a tap dancing lesson (A TAP DANCING LESSON!) for a week on Sunday at 10am. Pray for us!