Saturday was an auspicious day in the annals of ROCK for LO! The Validators began work on their SIXTH studio album! Note this day well, oh you historians of ROCK, and also of ROLL.

I had to get up at KRAZY o'clock in order to be at the studio in Derby at 10:30am, but this was more than made up for by the fact that I bumped into Mr K Hewick in Derby town centre. I was quite surprised to see him and he was very surprised to see me but we had a LOVELY chat and he, ever the prepared professional, even gave me a couple of CDs. He'd been in town to play at a Kevin Coyne tribute the night before (which coincidentally our very own Mr FA Machine had been at) and was on his way to a Christmas Fair back in Oadby. It was lovely to see him!

I thus arrived at Snug full of happiness which was only increased when I was greeted by the smiling face of Mr T Pattison, saying "You're just in time - I'm about to do the drums!" He'd been in since slightly earlier with Mr R Collins, our engineer/BOSS for the weekend, setting up the kit and LUCKY ME I'd arrived just right to not miss ANY of about an HOUR of drums being hit. MY FAVOURITE BIT.

Mr T "The Tiger" McClure and then Frankie arrived within the next five minutes and we were QUORATE (as Mrs E Pattison would not be arriving until curry o'clock). We had a chat while the drums pounded then got ourselves together and, by 11:30am, were ready to WORK.

And work we very much did as, over the next few hours, we PLOUGHED through a TONNE of songs. The EASE with which we did this was aided by several things, notably the FACTS that 1) Tom had printed out a Spreadsheet Of ROCK 2) we'd spent the past year Actually Learning The Songs (a revolutionary idea which I suggest other AVANT GARDE groups like us experiment with) and 3) the studio was set up right nicely for us. As usual Tim and Frankie were in the main recording room, with me glaring out at them from the control room, but this time we had Tom in the seperate recording booth so we could all play along together. Here's my view of proceedings: 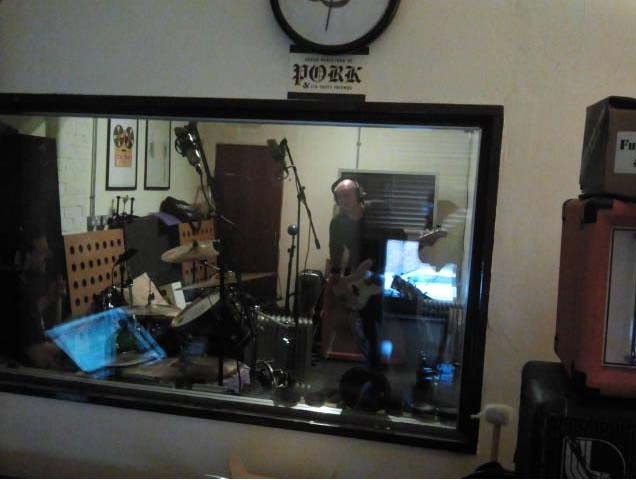 This way all of us could see MOST of the rest of us, and we were all connected via microphones and headsets, so we could RATTLE along, eventually recording (You Make Me Feel) Soft Rock, 20 Things To Do Before You're 30, Easy Christmas, That Guy, Burn It Down And Start Again, We Did It Anyway and Leaping Hare In Broadgate. We worked SO efficiently that we EVEN had time to fulfil a long-held dream of Tim's by Jamming In The Studio! I'm not sure quite how well that actually went, but we did DO it at least! We also had a quick go at re-recording I Want To Find Out How It Ends but, as Rich said: "You can do it better another time. Go to the pub."

Who were we to argue? We packed up for the day and headed out to Frankie's local, where Mrs Machine joined us, and then on to BALTI INTERNATIONAL for the traditional Validators' Christmas Curry. Emma joined us there and a HIGH old time was had. There'd been some suggestion of sorting out gig plans and album titles, but as far as I recall it was mostly CURRY and LARFS. We said our farewells full of the joys of ROCK, ready to reconvene next morning for more of the same!