I was having one last look at twitter before going to bed on Monday night when THIS popped up in my notifications: 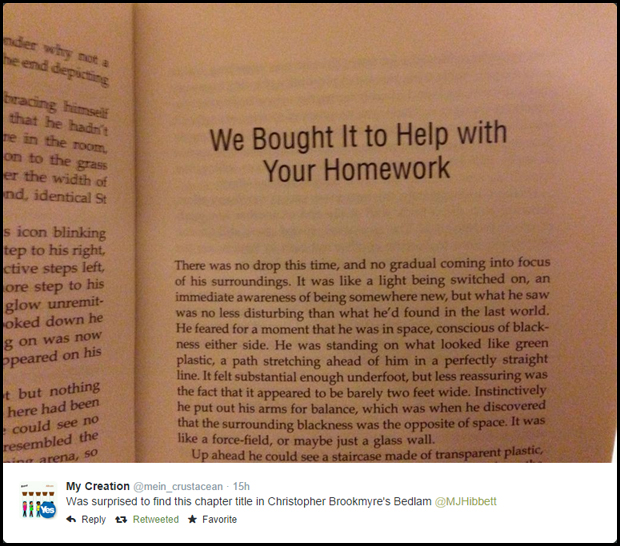 Gosh! Had a big proper famous author REALLY used a quote from one of my songs as a chapter heading? "We Bought It To Help With Your Homework" is one of the choruses for Hey Hey 16K but, I thought, maybe it's also a common phrase elsewhere too? I'd heard of Christopher Brookmyre but didn't know much about him, so looked him up on wikipedia and found that he was born very much at the right time to know the song (i.e. he's two years older than me and thus would have been in the PRIME SPOT for ZX Spectrum nostalgia when the song came out). Looking a little bit further I found an interview with him talking about his favourite old games, including Jet Set Willy, and ALSO discovered that the book "Bedlam" is partly about computer games.

The whole thing was confirmed when I went and looked a bit more on twitter and saw THIS exchange:

I think that makes it official!

I know it's not really a HUGE DEAL, but it does make me EXTREMELY HAPPY to know that a song I wrote 300,000 years ago still means something to people, and has slipped gently into a tiny corner of popular culture. I mean, I realise it's not quite Swedish Scientists Hiding Bob Dylan Lyrics in Scholarly Articles but it's still rather lovely. I guess this means I'd better buy the book now doesn't it? Authors take note! You can increase sales by at LEAST (also possibly at MOST) one copy simply by sticking one of my song titles in!