Since moving into our new flat The Pictures In My Sunday Supplement and I have been behaving unusually NORMALLY, like a Normal Couple or something, and this reached its APEX when we Had Some People Round For Nibbles on Sunday afternoon.

Okay it was The Hewitts and we did some ROCK ADMIN while they were round, but STILL: we even went to the PUB afterwards for a NATTER. I expect to have an IKEA LOYALTY CARD and a LABRADOR before the year is out.

The rock admin section of the afternoon was to get some photographs taken for the forthcoming YOUTUBE version of our Total Hero Team Podcast. Long ago I thought about doing a proper FILM-style version of the show, but realised this would be ENORMOUSLY hard work, and so concentrated on doing an audio only podcast. However, when it came time to release it I did wonder about maybe putting it on YouTube too, so The Likes In My Comment Section suggested we could take PHOTOGRAPHS to accompany the sounds. We discussed various ways of doing this, and on Sunday finally decided that Steve and I would strike POSES representing each major "beat" of the story, which I'd then string together to make a kind of Fumetti video.

We had a bit of a job working out where to take the pictures, until Meg suggested standing in front of our big windows with the curtains drawn, which turned out GRATE as it looked like we were in a THEATRE, like Morecambe & Wise or something (NB in all comparisons of this kind, i am totally Eric, all right?). With this settled we had a fun half hour of me and Steve throwing SHAPES while The Shutter On My Lens clicked away. "You and Steve are good at posing", she said, and I tried to look SURPRISED. Here we are, POSING: 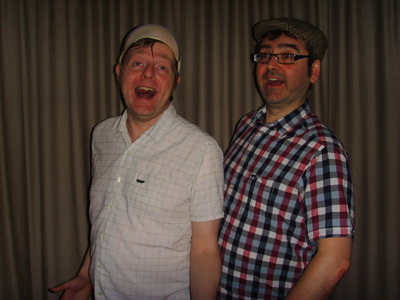 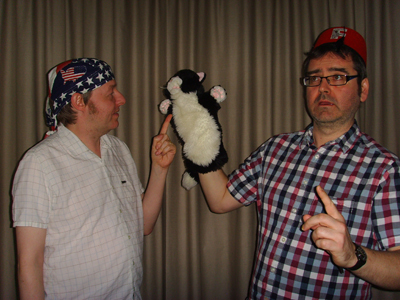 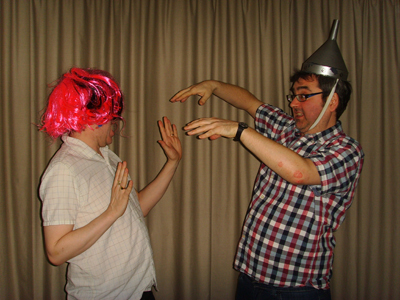 NATURALISM at it's best!

With that done we went to the PUB leaving me in no state to do any EDITING when I got back (we watched the film "Once" instead - it was all right, but crikey, BORING songs). I've still got half the audio episodes to get edited, but once i've done THAT I'll get going on this next bit. The PLAN is to release the six episodes on VIDEO when the final audio one comes out, and ALSO to unleash a BANDCAMP ALBUM version with the links taken out. It's going to be a PROMOTIONAL EXTRAVAGANZA!