Sorry for lack of BLOGS this week, I have been busily gearing up for the release of I Want To Find Out How It Ends on the 23rd. The video is properly DONE now and I've got a WEBPAGE set up with all the details, including the soundcloud, youtube, iTunes, Amazon, spotify and bandcamp links. It's TOTALLY modern!

I'm also working on the Press Release, and it was for this reason that I needed to check a couple of facts with Mr S Patrick, one of the writers of A Brief History Of Time Travel, the show which has I Want To Find Out How It Ends as its theme tune (and which is ALSO launching on the 23rd). We recorded a batch of instrumental tracks for them for possible use as background music, and I thought I'd better see if they actually HAD used them, before showing off about it in the press release. To my DELIGHT Seb told me that they had INDEED used it, lots of it, and also included a picture of the ARTWORK for the ORIGINAL SOUNDTRACK i.e. the package of ALL the music we recorded, which was sent out to some of their Kickstarter Funders. Here it is: 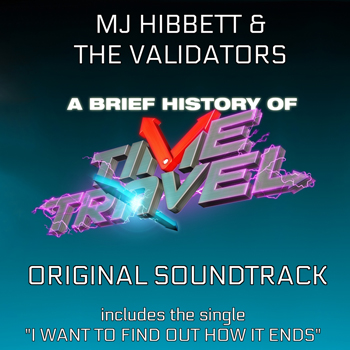 Looks PROPER, doesn't it? I will, needless to say, be BANGING ON about this too when I tell The World's Press about it all. The current plan is to send out the press release AND an mp3 of the single out on the day of release - after YEARS of doing Press Stuff a MONTH ahead of release this feels WEIRD, but it does seem to be The Modern Way. I will also be sending out the Newsletter on the 23rd, a week early so as not to DOUBLE HASSLE everyone with extra mailings, and that will have all the info on where to buy it, listen to it, see the video and/or listen to the sitcom.

It feels like AGES since this was all started, I can't WAIT to unleash the finished STUFF upon the world!