The second ACT of our Edinburgh Stay (THEATRE TALK) began to end on Tuesday, as The Days In My Week was booked to head home and thus the Window Of Wives began to close. We've been going OUT for breakfast every morning, being dead sophisticated, and on this final morning discovered a dead nice cafe, The Engine Shed, that was not only at the end of our road but also Vegetarian! Some places seem to like keeping SCHTUM about being veggie, thinking it will scare people off, but we'd have gone sooner if we'd known!

We trundled down to the station and tried the First Class Lounge - The Seats In My Lounge had bought an ACTUAL First Class ticket as the Bargain Offer she'd been intending to get had turned out, at the ticket window, to be unavailable, so we thought we ought to make the MOST of ALL available benefits. It was quite nice - i had a free cup of coffee!

The train turned out to be PACKED as a) the one before was cancelled b) there were hundreds of people going down for the England vs Scotland next day at Wembley. Apparently POLICE entered the train at York, but I think she was OK, though I was obviously SADFACE to the MAX as we said our goodbyes.

I didn't have much time for MOPING however, as my sister and family were in town, and when this involves FOUR NEPHEWS there is always a LOT going on!! After some lunch we SWARMED back into town to see "Captain Flinn And The Pirate Dinosaur." For some reason the posters had been catching my eye all week - can't think why... 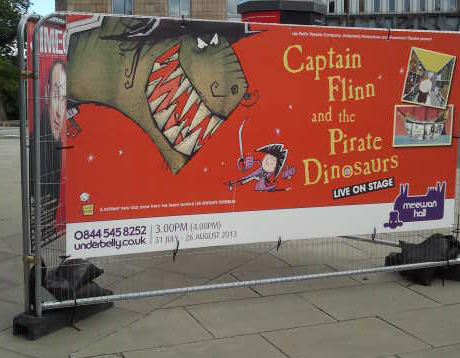 It DOES look familiar, doesn't it? The show itself was FINE - it was full of kids so there was a LOT of noise and moving (NB in the audience) and tho the show itself did seem a bit knocked together, the Giant T-Rex was VERY impressive!

Unsure of what to do next I took everybody round the corner for an hour or so of CHAT (adults) RUNNING AROUND (nephews) in the Assembly's astro-turfed garden before heading back across town with Child Roadies in tow for the SHOW. It was another big (30ish) audience, but by CRIKEY it was a TOUGH one. "Cricket Applause" was much in evidence and though I think most people enjoyed it, it felt like HARD WORK at times!

Afterwards I HUGGED all available family members before they set off home and I went a) for a recuperative beer then b) back to the flat for TEA and a night off. It had been a day of many farewells, and I needed a KIP!