Blog: The Show Must Go On

We were up bright and early to go and see a show called "Shall We Just See This One?" which, apparently, had been in Chortle's Top Ten Most Off-Putting Fringe Guide Blurbs. However, market research (i.e. asking during the gig) showed that EVERYONE (including us) had gone BECAUSE of the blurb! The show itself was GRATE - very funny and very jolly, i RECOMMEND!

Being DEAD SOPHISTICATED The Words In My Blurb and I popped to The John Lewis Cafe for a cuppa, and found that it had an ASTONISHING view looking out to Leith from the top floor of the shopping centre. It's AMAZING - if you're ever in this incredible city I heartily recommend it - and the tea was nice too.

At this point we divided our forces, with The Hills In My Range going off to see another show and me heading for The Royal Mile, to do the Stand Up Tragedy podcast at The Soundcloud Booth. This was a thoroughly enjoyable experience, despite the COLOSSAL NOISE of everything going on around us. I did "Get Over It" and, for the first time, a fully joined up version of "Total Hero Team", then took part in some interview/discussion. As per I found everyone else was being QUITE SERIOUS about everything so may have over-GAGGED things a bit - every time I talk publicly with Comedy Types this ALWAYS happens, I'm supposed to be the Sensitive Artiste, not them! You can hear the results HERE.

We regrouped with Meg outside the Teviot and went to see "Eric and Little Ern". It wouldn't be The Fringe if we didn't see at least ONE Morecambe and Wise show, and this was a GRATE one. It very much raised the question: why aren't there loads of Morecambe & Wise Tribute Acts doing the rounds? I, and thousands of others, would PAY just to hear the jokes again! INDEED where we were sat we couldn't see the faces of the actors, but didn't NEED to - I've seen those routines so many times I know EXACTLY what they're doing at all points!

We went back to the flat to collect gear, had some tea, then headed to the venue. Everything was going SO WELL - look! there are The Pattisons who have come to see us, i thought, what a delightful and marvellous Fringe I'm having!

"The man said the show is cancelled" said Emma. "Oh my!" I thought, "what a foolish mix-up! I shall soon sort this out!" Someone from the venue was there who asked to speak to me in private... which turned out to mean stepping one foot away, so he could tell me that yes, they were closing our room from 6pm onwards for A Reason.

I got told off for speaking about it out loud 5 seconds later, so will not repeat the offence here, suffice to say that we couldn't use the room... although I could wander in and get our props, as i was determined we WOULD do the show. Somehow.

Mr D Munro, who'd been in to see us a couple of days ago, wandered past and became an INSPIRATION. On discovering what was occurring he DIVED into the entirely empty shop next door, where one person was busy folding some flyers, in front of two CLEARLY and COMPLETELY EMPTY rooms. She told him that we couldn't possibly use their huge empty rooms as there were other people coming in soon to help fold flyers. These must have been a) tiny b) intangible flyer folders, as we didn't see them when we looked back an hour later.

Undeterred, Dec emerged and said "Just do it in the street!" and so we DID! We took our 14 strong audience down the road with us to some steps and Did The Show Right There. PHOTOGRAPHIC PROOF: 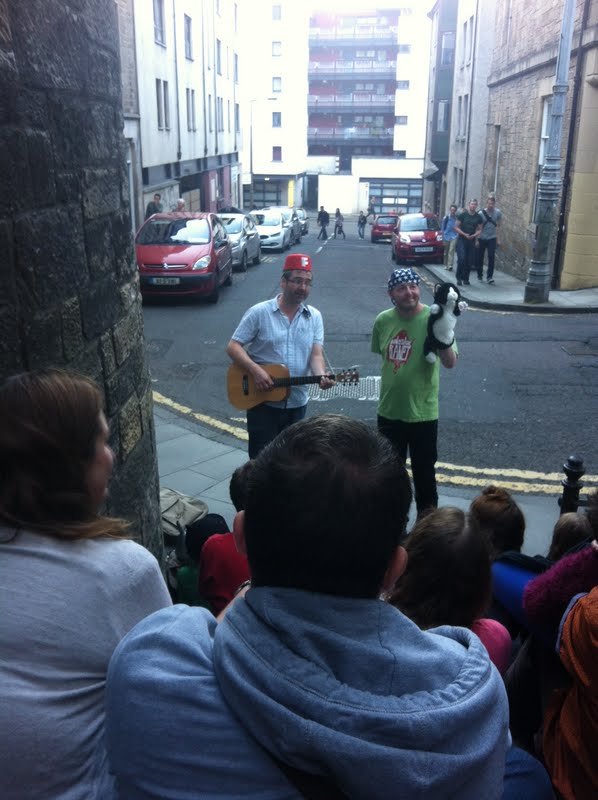 It was a Real Fringe Moment! As I said later (emailing someone in charge of Musical Theatre Awards), when you have a show trying to get back to the bare bones of What A Musical Can be, ESCHEWING large cast,big bands and complicated costumes, doing the show without even a VENUE is the logical next step. We totally did the ENTIRE SHOW - PROPERLY - for everybody, and everybody merrily sat there for a whole fifty minutes and watched. Steve directed the audience to only sit on ONE side of the stairs, so there was a constant flow of people going up and down beside our audience (including a TROUPE of Young Musical Artistes who arrived singing some songs from their shows... but then HALTED when they saw what we were up to) and also cars coming VERY close behind us and MANY people taking pictures. It was GRATE - Steve Did Not Like It to start with, but by the end we were RIGHT into it. HOORAH!

Show done we hugged the Pattisons, thanked everyone for coming, then nipped to the pub to celebrate. The Steps On My Stair and I finished our evening by popping back to the venue (and returning the props bag to the now deserted room) to see Johnny Awsum upstairs, who was ACE. He did a brilliant uplifting FUN show, which we initially thought would be waylaid by a STAG DO, but they turned out to be Very Well Behaved. It was three pensioners near the front who were Rowdy and Wouldn't Shut Up, but Mr Awsum handled them beautifully. We left with HUGE GRINS all over our faces!

Back home i got onto the emails to contact the Fringe Office, telling them what'd happened, including photographs, asking if they could get us some coverage. AMAZINGLY, several days later, we appear NOT to be on the front cover of The Stage. It is a SCANDAL!

Reminds me of the time you played in Glasgow and finished off the gig on the pavement on Great Western Road outside the old Captains Rest. So you have 'form' for this kind of thing Hibbett!
posted 13/8/2013 by Gary Gilmore