After all the WORRY about TIMING (we had two hours to get from Buxton to Manchester, check into our hotel, get to the venue and start the show) Steve and I rolled into Manchester Piccadilly bang on time on Sunday afternoon and walked round to our accomodation - the Mercure Hotel. This was a LOT more like it, it was SWANKY! Confident of time we unloaded, rearranged our bags, went down to the lobby, out and straight into a taxi. This was going SO well!

We drove round the corner... and stopped. Our driver checked some DIALS and then got out, opened the bonnet, and looked within, concerned. We sat inside the taxi, also looking concerned, until he came round and suggested we just get another taxi.

Panic! Danger! Peril! We only had five minutes left to get to the venue for our set-up at 7pm! WOULD WE MAKE IT!?!?!?

Well, yes, we did. We got another taxi just round the corner and all was FINE. It was lovely to be back at The Kings Arms as a) it's a lovely pub b) it always feels like you know it more than you really do, just because it was on Fresh Meat. We went upstairs to set up and asked the sound guy how ticket sales were going. "Slowly this year" he said. "How many have we sold?" I asked. "Two".

"That's Warren and Ellen" then, I said to Steve, and LO! I was entirely correct, for downstairs in the bar we found Ms E Pemberton and Mr W Pilkington, and we gathered together for BEER and a CHAT. We did this for 20 minutes then all went upstairs to find that Warren and Ellen were the ENTIRE audience!

Steve and I went and stood backstage and, as the lights went down, I said "If we were comedians we wouldn't be doing this". "I KNEW you'd say that!" he said, almost as if I have expressed my DISAPPOINTMENT in Comedians in the past, when they have refused to do gigs due to lack of audience. Two people is MORE than enough for us (ONE is enough!) and so we went on and BY JIMINY we gave a show! At a couple of points (during It Only Works Because You're Here and Control Alt Delete we had the ENTIRE audience singing along! The show is SUCH good fun to do now it WHIZZED by, and it was VERY exciting at the very end when I said the bit about Fufu returning "at the Edinburgh Fringe!" ZOINKS! That's our next show!!

Afterwards we regrouped in the bar for a drink, as can be seen from this picture of the ENTIRE AUDIENCE: 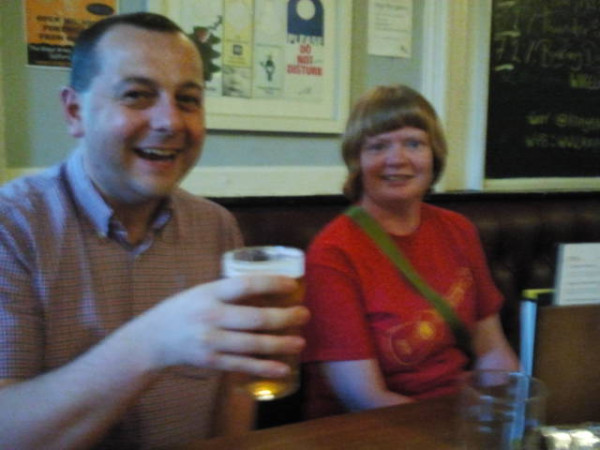 Soon, however, it was time to wend our way home and, after HUGZ, Steve and I set off in search of some TEA, as we'd not eaten since breakfast. Manchester seems to be full of HUGE GINORMOUS BUILDINGS, but not many actual PLACES, and in the end we had to resort to PHONES to find a curry house. As we sat in the Quite Posh Curry House, having Rather Nice Curry, it almost felt like we were in Edinburgh already!

And so ended our weekened ODYSSEY to two Fringes, where we found that while me and Steve may not be quite MATCH FIT yet (we were both KNACKERED next day) the show itself totally IS. Next stop: EDINBURGH!!