Here's a quick update on the PBH Free Fringe Benefit album that I was on about last week: it's going really well!

Here's a slightly longer update: it's going really REALLY well! I emailed nearly 50 people, from the worlds of ROCK and THE FRINGE, explaining what the compilation's about and asking them for a track. Well over half of them have got back to me since to say "Sure thing", which is utterly wonderful. With a few people doubling up and/or bringing other people aboard I now have TWENTY tracks submitted and at least another 12 promised. There's a good chance that some of those won't happen after all, but as we're already nearly at a DOUBLE ALBUM i think it's going to be pretty darn good value for a FIVER and with any luck we'll be able to raise a good bit of CA$H for the Free Fringe.

I don't want to reveal the full tracklisting just yet - not least because I don't know what it'll actually BE just yet - but suffice to say that neither INDIE TYPES nor fans of THE FRINGE will be disappointed with the line-up. It is DEAD GOOD! Instead, here is the current version of the COVER, what I did yesterday: 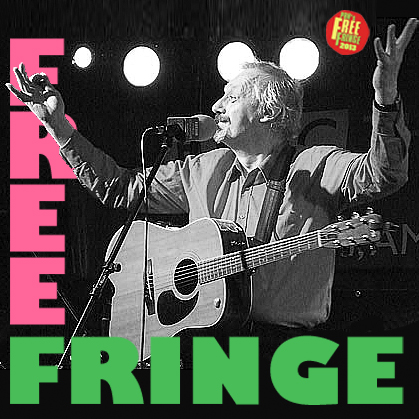 The legendary Mr Peter Buckley-Hill there, channeling ELVIS. One thing to NOTE is that a couple of people have said to me that they received an email and just assumed I was sending it out to everyone in the entire world OR that they'd got it by accident, so didn't think they were NEEDED. This is INCORRECT! I sent it to a SELECT GROUP (of nearly 50,but still) of people, ALL of whom I wanted to be on it. So, if you've had that email and have a track, GET GOING, I need it by Monday!