Yesterday afternoon I got a DELIGHTFUL twit from Norman Records, THUS:


ASTOUNDINGLY it turns out that an Actual Proper Scientist has suggested a way that Space Dinosaurs could be REAL, in terminology oddly similar to Dinosaur Planet!! As other people started to ALSO tell me about it a PLAN had formed in my BRANE: Let's Do A PRESS RELEASE!

THUS I say myself down to write one and have JUST sent it out to Leading Media Outlets. You can read the whole thing at www.dinosaurplanet.co.uk/proof/ (and if anyone would like to link to it or RE-TWIT it I would, as ever, be extraordinarily grateful), but the GIST of it is as follows:


MJ Hibbett's Theory Of A Dinosaur Planet Could Be True, Says Professor


A report in this month's Journal of the American Chemical Society suggests that the terrifying Space Dinosaurs from MJ Hibbett & The Validators' album 'Dinosaur Planet' could very easily be real.

In the paper 'Evidence for the Likely Origin of Homochirality in Amino Acids, Sugars, and Nucleosides on Prebiotic Earth' Professor Ronald Breslow theorises that Tyrannosaurus Rex and other dinosaurs may have evolved on other planets to become more intelligent than humans. 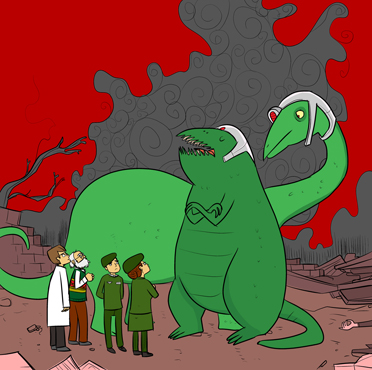 
Professor Breslow, of Columbia University, says: "Elsewhere in the universe there could be life forms (which) could well be advanced versions of dinosaurs, if mammals did not have the good fortune to have the dinosaurs wiped out by an asteroidal collision, as on Earth. We would be better off not meeting them."

Alarmingly this is almost exactly what does happen at the start of the rock opera 'Dinosaur Planet'. Space Dinosaurs (whose ancestors escaped the Cretaceous-Tertiary Extinction event 65 million years ago) return to Earth as "kill-crazed psychopathic fans of war and death" armed with high tech weapons of destruction, intent on wiping out humanity.

"I did do some research into the science of dinosaur extinction while writing the album and came up with some ideas about what could have happened to them", says lead singer MJ Hibbett, "I never expected to be proved right!"

The album, which has also been quoted in the magazine of the Smithsonian Institute, goes on to posit the theory that the Dinosaurs were kidnapped by Giant Robots who will follow their prey to Earth and destroy the planet. "I'd be quite happy to be wrong about that," says MJ.

(Dinosaur planet is available to purchase from all online stores, download sites, and from the band themselves at http://www.dinosaurplanet.co.uk)

EXCITING, isn't it? I'm going to email Professor Breslow and send him a copy of the album to make sure he doesn't MIND me taking his name ever so slightly in VAIN. I'm hoping he won't - I'm guessing that someone who suddenly mentions SPACE DINOSAURS in a paper about AMINO ACIDS has a sense of humour - and I'll be sure to thank him VERY much for backing up the idea!

In the meantime, all Validators are on STANDBY for the - surely - INEVITABLE STORM of MEDIA INTEREST!