You find me today all EXCITED and A-DITHER, for LO! tonight The Validators return to LONDON for the Dinosaur Planet LAUNCH GIG! 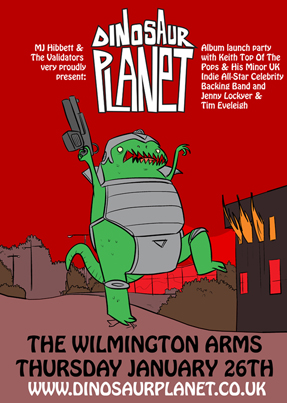 It's been a long time since we played down here, but even more than that it's been AGES since we last self-promoted a GIG at ALL, and I'd quite forgotten how much WORK it is. I mean, I do Totally Acoustic every month, but that's pretty EASY - I block book the rooms, there isn't any soundman or DOOR to worry about, and the acts just turn up themselves.

Similarly, doing the Moon Horse and other Fringe shows is fairly straightforward, as most of it is worked out FOR you. There's forms to fill in and ARRANGEMENTS to be made, but most of the difficult bits are laid on for you and all you REALLY need to do is be organised and follow the instructions.

It DOES make me appreciative of all the work PROMOTERS have done for us when they've put me and Steve on over the past few years - ROLLING UP at a PUB to find someone else has done the posters, the facebook and ordered some GRUB is a delightful luxury that is all too easy to take for granted. Similarly just DOING gigs as the pair of us - or, indeed, on my OWN - is SO much simpler than trying to arrange for a Mighty Rocking Outfit like The Validators to not only get THEMSELVES down to London town, but also their INSTRUMENST, AMPLIFIERS and PERCUSSION.

But so far it all seems to be working out - a LARGE number of people are involved, including The Albums In My Discography (Merchandising Stand) and Mr S Hewitt (DOOR), and we've got various cast members coming along for guest spots too. The Wilmington themselves have been LOVELY, putting up posters and coping with my occasional NAGGING, and our Guest Acts ALSO are well prepared.

I _think_ it's all going to work out, and though i DID get a bit of THE FEAR last night (for the first time in AGES) today that seems to have transformed into EXCITEMENT! We're doing an ACTUAL GIG! TONIGHT! ZOINKS!

So, if you're in That London this evening (Thursday 26 January) and fancy some ROCK AND ROLL GOOD TIMES, it would be lovely if you could pop along to The Wilmington Arms on Rosebery Avenue, where me and The Validators will be joined by Jenny Lockyer, Tim Eveleigh, Keith Top Of The Pops, a lot of Minor UK Indie Celebrities, some Special Guest Stars, and, hopefully, an audience! Sounds GRATE, doesn't it?