Blog: Meanwhile, In The Writers' Room

If you've ever seen a documentary about the making of American sitcoms - or indeed a SITCOM about makingb sitcoms - you'll be familiar with the scene where they go to The Writers' Room. This is where the comedy is FORMED, it's a room full of writers [NB HENCE THE NAME] all SLAVING over a script, drinking coffee, throwing paper at each other, tearing their hair out, all in search of ONE MORE GAG.

This is what it has been like in The Validators this past week - albeit VIRTUALLY - as between us we battle over the VERSE for our CHRISTMAS CARD. OH! The ideas! The BATTLES! The constant STRIVING for PERFECTION! And each time it looks like we're nearly there... WOAH! Objections are raised, inconsistencies are pointed out and it is HO! for the drawing board!

It has been a LONG and ARDUOUS process but I think we're nearly there (mind you I thought that last week). The rest of the card has been quite simple to perfect, however, very greatly helped by the FACT that it's been designed by the marvellous Mr John Allison. Look! See what he has DRAWN 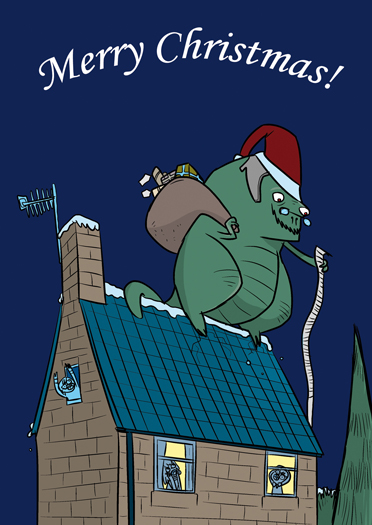 If all goes to plan we'll have a few of these available for sale in the SHOP in a week or two, and MY WORD but whoever RECIEVES these beauties will be in for a treat. I just hope some of them read the verse!