Blog: A Whole Decade Of ROCK

Today is an auspicious day in the annals of ROCK for LO! it is the Tenth Anniversary (or "Tin Anniversary" which sounds suspiciously like whoever thought of it was put on the spot and came up with the closest thing to "ten" he could think of. We came THIS close to giving each other Suntan Lotion for ten years) of the first time me, Frankie, The Tiger, Emma and Tim did a GIG all together! Get out your bunting!

The gig was at The Bull & Gate, playing, I think, with The Fighting Cocks. Some aspects of it I remember VERY clearly, other parts are very fuzzy - I was reminded of it by Mr S Hewitt who thinks it MIGHT have been the first time he saw us, but there were OTHER Bull & Gate gigs around then that it could be. There's SEVERAL people whose first Validators gig it could be too, but it's all a bit confusing.

I definitely remember Tim and Emma getting THE HASSLE from an official in the Kentish Town tube station, and me being MIDDLE CLASS about it and saying "It's not good enough!" I also recall we went to eat in NANDO'S beforehand, and got so excited we had our picture taken, THUS: 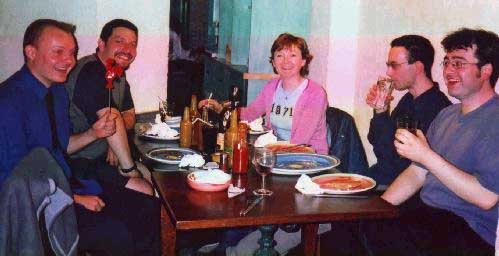 Look at us! So delighted! SO HAIRY! So... purple? The first three pictures in this gallery were from that night - I think this was when we'd JUST got a scanner at work, so i was THRILLED to be able to put pictures up on the interweb. It was THE FUTURE!

Looking back through the NEWS ARCHIVES I see that this was a night of SEVERAL things occurring - I had a quick chat to The Drummer From Ween (who seemed like a nice man) and someone who worked for NEWSROUND, who briefly floated the idea of me writing some political songs for KIDS, like a 21st Century Richard Stilgoe. Talking to The Drummer From Ween DOES seem like a decade ago, but I can't believe the Newsround thing was - I still sit and wonder if they're going to call me!

It was also the one and only time we performed our cover version of "Stan" as a full band - and even then we got CURTAILED by the soundman so only did about 30 seconds of the intro before realising the vocals weren't switched on. It's funny, I remember bits of the evening very clearly and, looking through ALL the gigs from 2001, have memories for ALL of them. I've been thinking this a lot lately - gigs from WAY BACK WHEN seem to all have stories attached, much more so than gigs from the past few years. At first I thought "Is this because I have become old and boring? is it all a SLOG now?" then fairly quickly realised that a) i do about THREE TIMES as many gigs a year now as I do then and b) most of the Humoroous Stories centre around me travelling a MILLION MILES to do gigs to NOBODY and then getting drunk and falling over, something which happens less often these days! Also I have got into the habit of doing large chunks of my gigs in the same venue (like Totally Acoustic and Edinburgh).

Anyway, the point I came here to make was this: Goodness me! Ten marvellous years of Classic Validators ACTION! There are MANY MANY stories allied with this line-up, and almost ALL of them revolve around us having a GRATE time - but then, they're all so LOVELY it would be difficult to be any other way, wouldn't it? Here's to another ten years, by which time we may even have finished "Dinosaur Planet"!