I found myself once more heading South and West after work on Friday, for balmy Brixton where Damnably were running a Bands For Japan night at The Windmill, in aid of... well, Japan, really.

I arrived just in time to see More Band Times aka George of Damnably (and Former Utopia) and Chiara. I've known George for MANY years and gigged with him MANY times but I think this was my MOST FAVOURITE time i have EVER seen him, for LO! it was the GEORGIEST gig i have ever seen him do i.e. LOVELY, also FRIENDLY and FUNNY and just all round ACE. This was probably helped by the inclusion of Chiara and songs like "Those Trainers Are Fucking Crazy", but whatever it was led to my wandering around with a big GRIN for the rest of the evening.

There were other delights too, not least the first band in the MAIN room i saw (whose name began with K, but I can't remember the rest - the event was sponsored by ASAHI, of which there were SEVERAL free samples for bands...) who were DRUMS and... well, it looked sort of like a GIGANTIC WOODEN BAGPIPE, but it was more of a DISMEMBERED CHURCH ORGAN. It was AMAZING - look! 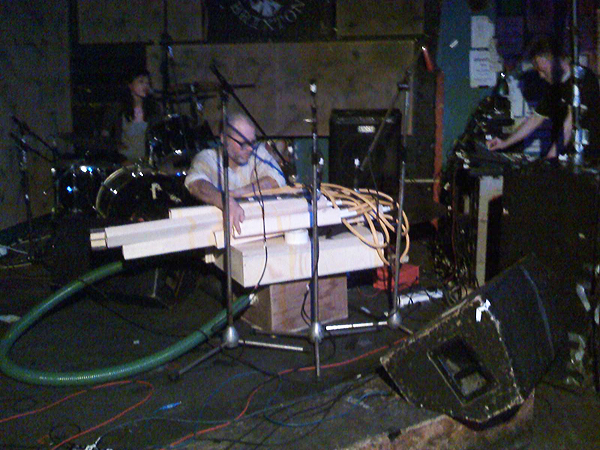 I had a chat to the chap afterwards, who a) described it as a WOODEN SYNTHESISER and b) said "it's all to do with resonant frequencies". I felt that it was a GRATE SHAME that Dr Neil Brown had not been there to see it!

I wandered about a bit, watched "No Cars" who were GRATE, then went in and watched Rebekah Delgado with her STRING SECTION, which was ALSO GRATE. They were playing in the same room as George had, also that i WOULD, which was the tiny little SHED on the side of the actual pub. It was a lovely little room, dead cosy, and was indeed a lovely NIGHT. At one point I stood outside in the warm glow of an early evening at the end of a glorious sunny day, listening to the hubbub within, drinking cold lager, and it felt like being on HOLIDAY.

Then I went inside and helped to put out a FIRE that had broken out. THAT'S RIGHT: HEROISM. The cigarette butt collector was AFLAME, a nice Spanish (i think) lady had got a pint of water and was FLICKING it at the smoke. I LEAPT IN and POURED water in instead. I don't expect MEDALS or anything. The knowledge of a building saved is the only reward I require.

Once Rebekah had finished I was asked to CRACK ON with my set - there were MANY bands to get on - so did exactly that. There was a microphone set up in the shed, but I reasoned that this was totally unnecessary, so ESCHEWED it. Also I had been telling everybody else they didn't need it, so it would have been RUDE if I had gone against my own much proferred advice. I did THIS:


Now, sometimes I do gigs and think "That was perfectly ably performed. Well done everybody, a job done to acceptable standards." Sometimes I think "Oh dear. You have let yourself down, you have let the audience down, and you have LET ROCK DOWN." And then there are OTHER times when I think, just for a moment, "You know what? Give me a small room and 10-20 people and i will TAKE ON ALL-COMERS!"

Or to put it another way, i had a WHALE of a time and I think the people who'd ventured into the shed quite enjoyed it too. We did a LOT of joining in - when you're that close together it's hard not to - and my FAVOURITE bit was right at the start, when we all called out in unison "It's Starting! Come On In!" It didn't get any more people IN or anything, but it was all rather beautiful, and set the tone for a singalongy twenty minutes or so in the company of delightful people. I thoroughly enjoyed myself and, as I say, felt some PRIDE in my performance. I think small rooms with an intimate selection of friendly people are when i am at my BEST. Why, it's almost as if little rooms and small audiences is the kind of area I have done MOST of my gigs in!

Towards the end my friend Ms S Jenkins arrived with her COUSIN and so i got to spend most of the rest of the evening sat out back, drinking beer and having a bit of an old CHAT. MAN ALIVE, is their anything better than sitting out the back of a pub in lovely weather, having a chat with your PALS? It's the sort of thing that I reckon could CATCH ON!

It was a GRATE night out all round, and I was very pleased to discover they raise eight hundred and fifty quid from it - crikey! that's not bloody bad is it? Charity AND a good gig AND a lovely evening? I've got to do MORE of these sort of things!

Sounds fab, sorry I didn't make it over. Had a looong day in the park with the kids (and a late afternoon with a couple of beers, friends and more kids) and ended up with a nasty headache. Beer on me next time.
posted 11/4/2011 by Thom