Blog: A Lunchtime Stroll Around Mayfair

As previously mentioned I am currently on a WALKING PROJECT which involves vaguely trying (a bit) to walk round central London, Boris Bike Depot Spotting. I know it probably doesn't sound the most GLAMOROUS of workday hobbies, but today's was FULL of FASCINATING (NB to a degree) incident.

There was CELEBRITY! In Soho I came out of a Craft Supplies Shop (looking for WIGGLY EYES for Moon Horse props) and saw Tjinder From Cornershop! I would have gone over and said "Hello! Do you remember me from The Magazine Hotel in Leicester, where you briefly worked, and played a couple of gigs, and I drank at LENGTH, and played a couple of gigs?" but a) was pretty sure that he wouldn't, as he didn't LAST time i saw him about ten years ago b) I had just fallen over the STEP in a rather foolish fashion, and didn't want to make things worse. This was the second of THREE idiotic falls - for the entire hour of my walk i was dreading the THIRD trip, so when it came outside a Tat Shop on Oxford Street i LARFED with relief.

There was ART! I'd seen someone reading a free paper on the tube this morning with an article about an interesting SCULPTURE outside The Dorchester Hotel, so thought I'd go and have a look. Here is a PHOTO of it: 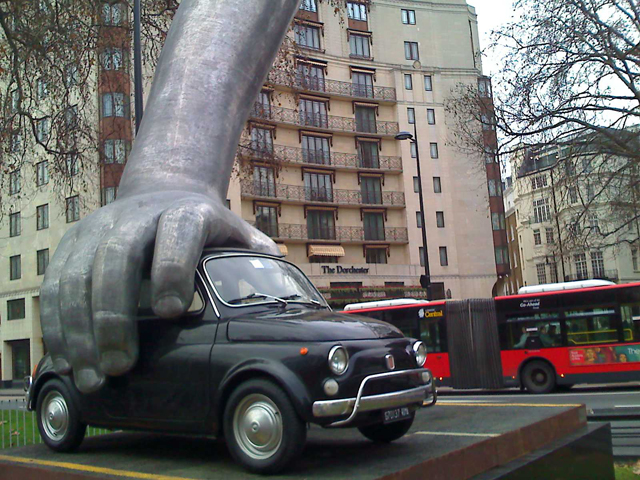 COOL, huh? Tbe picture in the paper was much better than the above, as they'd done it so you thought at first that it was an ACTUAL child's hand holding a toy car. I wasn't the only one impressed - when I got to the traffic island to take the picture someone ELSE was already there doing the same, and as I left yet another took my place. It was GRATE!

There was SOCIAL OBSERVATION! I couldn't help noticing that in Mayfair there were quite a few bike depots that appear on the map but haven't actually been BUILT yet. I also saw that there were a LOT more bicycles left unused at these depots than elsewhere in town. It seems to me almost as if Posh People don't a) use b) understand c) DESERVE nice bicycles like this - I know that this is partial, personal, unscientific poorly researched DATA that I am using, but HEY! that's what the entire future education policy is based on too, so it's clearly the sort of thing Tories like Boris would LOVE TO USE.

Crikey tho, one couldn't help also noticing that Posh People look BLOODY WEIRD. I tell you what, if you dressed the population of WISBECH in Barbour jackets and red trousers you could swap them with The Upper Classes and NOBODY WOULD KNOW THE DIFFERENCE. That's the MARVEL of in-breeding, if you do it long enough it doesn't matter who you interbreed WITH, EVERYBODY looks like a Farmer who's never been to the big city of Ely/a Baronet.

It was quite a relief to get back to SOHO, where at least people look ridiculous ON PURPOSE, and almost bump into a camera crew, SCREECHING about how wonderful someone looked. That London! City of RUMNESS and FUN!

pretty sure the 'owl' spambot filter test doesn't work. If this gets posted, it did.
posted 26/1/2011 by just testing