There was PANIC in Leytonstone over the weekend - the hot weather had engendered a PIMMS CRISIS! There was NONE to be had in Tesco, but luckily we were able to SOURCE some from nearby Leyton Asda. PHEW!

This was needed because on Sunday The Hewitts came round for the DRESS REHEARSAL for Dinosaur Planet. We had a BUFFET ready for the post-rehearsal cool down, and not to have PIMMS available would have been, frankly, BARBARIC.

Much like the AROMA coming out of the room we rehearsed in - MAN! It was HOT in there, especially for those of us wearing an array of HATS, WIGS, and ROBOT HEADS, and all the dancing about only exacerbated matters. However, we got through to the end in one piece with only a couple of slightly erratic sessions, and the costume changing was surprisingly easy. I kept telling Steve that this was due to the PLAYWRITING GENIUS what put in spaces for changeovers, but I don't think he was convinced.

We also had a PHOTOSHOOT, under the eye of The Lens In My Camera. Last year we got a bit caught out with this, as a few places asked for publicity photos and I didn't have any, so we got a good few done. Here's one of my favourites: 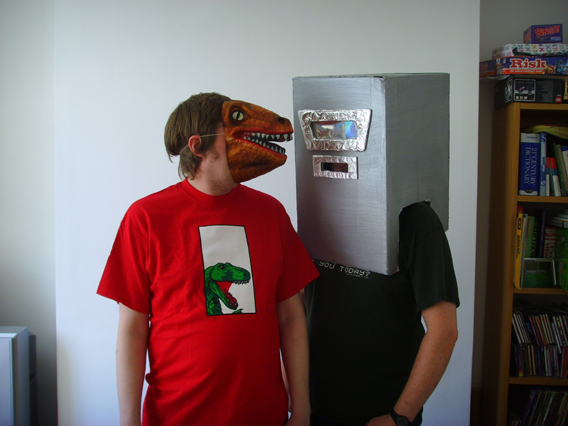 In addition we needed some pretty specific shots for the POSTER, which I've now started on. It's looking GRATE so far - similar to last year's but a bit more, well, EXCITING I think. I've certainly found it EXCITING enough to LOOK at every ten minutes, and I'll put the finished version up here as soon as it's done.

We thus sat back and enjoyed our PIMMS safe in the knowledge that things were progressing satisfactorily, and that tomorrow night's preview at Totally Acoustic (also featuring the brilliant Ben Moor) wouldn't necessarily be a TOTAL disaster. Indeed, so excited we were that we had a DIARY meeting - if all goes to plan we've got three more practices and about FOUR gigs to sort ourselves out in. It's going to be GRATE!