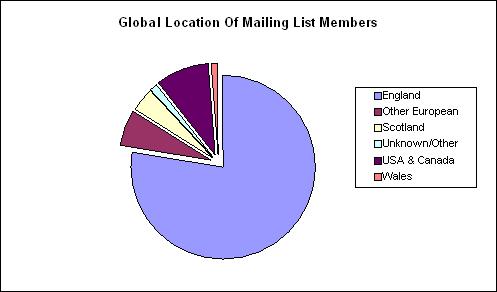 Not really any surprises here, as usual England is WAY ahead of everywhere else, probably because that's where most of my gigs are. But look at the other two big places - for somewhere with only a TENTH of the population and a TWENTIETH of the Hibbett Gigs that England has been BLESSED with, Scotland is pretty well represented. And look at The US of A - ONE gig ever, but it's got the second largest Validators FANBASE in THE UNIVERSE! Why on Earth we've never been chased by the giant American corporations and FORCED on a tour of Hawaii i will never understand.

These figures show only the GLOBAL reach of our organisation, of course. Let's take a look at just the UK, and see whereabouts on our fair islands these people are: 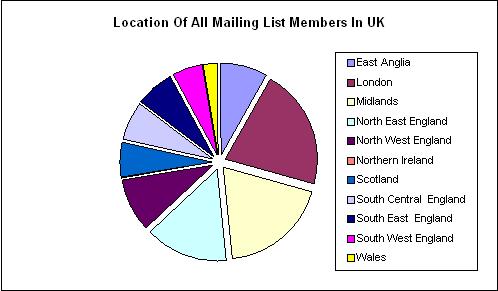 As you might expect, our HEARTLANDS are the places we live in, London and The Midlands, but there does seem to be a surpisingly good spread, with an understandable DIP in Wales, which we have NEVER ventured into (though if anybody would like to have us, I'd LOVE to play Cardiff... especially if it's near TORCHWOOD) and NOBODY liking us in Northern Ireland! I should say, this bit is based on people whose POSTCODES I have, so there's a few people who are in the UK whose postcodes I don't have, but not many.

In fact, let's USE those postcodes a bit more shall we? To finish off here's a TABLE showing precisely WHERE everybody is in the UK:

Now, this DOES tally quite nicely with GIGGAGE, as we can see from the tables last week. The top chunk especially is pretty much what you'd expect with the bottom being, basically, a long list of places I clearly haven't played ENOUGH. The only slight oddment is CARDIFF - I've NEVER played there and yet there it sits at number 11, above lovely GLASGOW which I've inflicted myself upon SEVERAL times. I think this is the main lesson of today's SCIENCE: get thee to CARDIFF Hibbett!

So, there are approximately 556 people on your mailing list, for whom you have postcodes!
posted 6/1/2009 by Dan H