Before we get going on this issue, let's have a quick look at the front cover, particularly the image of Doom's eyes. When I ran the survey of Doom's characteristics several of the most mentioned aspects of his appearance were to do with his eyes - that they were visible through his mask, enclosed within square eye holes, and are brown. Also mentioned were his facial scarring and use of rivets on the armour, and the fact (later on) that he looms over other characters.

All of these are present in this image, indicating that we are very much supposed to think that the "real" Doctor Doom is featured within, but when we read the comic itself we find that in the new version of Doom's mask some of these aspects are missing, with no square blocks around the eyes and no scarring. It's a bit naughty of John Byrne to mislead the reader like this (although I suppose you could argue that that's a Doombot on the cover), but you have to admit he knows his Doom signifiers!

After the lengthy exploration of Doom's character and history last time, this issue mostly concentrates on The Fantastic Four, which I guess is fair enough as it's their series. The first three pages recap the final page of the previous issue, with the Baxter Building flying into space and exploding. This is followed by a couple more pages showing an apparently dead FF floating in space while as probe checks what's happened, before revealing that they were actually playing possum inside an air-filled invisible force field. Phew!

They're alive, but they're still stuck up in space with only twenty minutes of oxygen left, so it's lucky that they have Mr Fantastic and his giant brain with them. He's got a plan which handily involves using everybody's special powers one by one. It's a fabulously efficient sequence where Reed forms his body into a spaceship shape, Sue uses this as a template for a force field and propels the "ship" heads towards earth by making a tiny air hole in the field, Johnny acts as a human heat barrier as Sue and Reed guide them towards Castle Doom, and finally She-Hulk comes to the fore as a human battering ram. 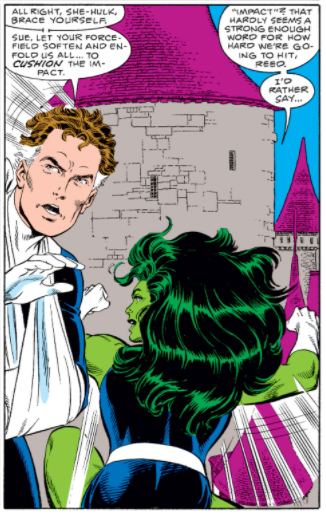 It's so elegantly done that it doesn't matter that there's not really much in the way of jeopardy. This is a team working effectively together, shown by a writer/artist who knows how they all work. The efficiency continues as they smash into the castle and together fight their way through a bunch of guard robots. It all seems very easy, and it turns out that there's a reason for this - the new Doctor Doom is refusing to acknowledge that there's a problem at all. His plan cannot have failed, so he must have killed the Fantastic Four and everything his systems and robots are telling him must be a lie. 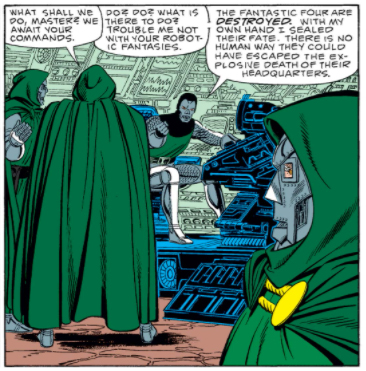 This is spectacularly deranged, like a Latverian version of calling everything "Project Fear". Even the Doombots are worried, realising that they must have cocked up the brain-transfer process but unable to do much about it.

The FF burst into the control room but, even though they're right there, Doom refuses to believe his own eyes!

It's all a bit nuts and close-minded- even this early version of Doom would surely have had 17 back-up plans and a tonne of death traps ready - to the extent that this version of Doom could get work heading up UK government enquiries. His refusal to accept realty does however allow She-Hulk to rip apart Doom's armour and reveal that it's actually Kristoff inside. 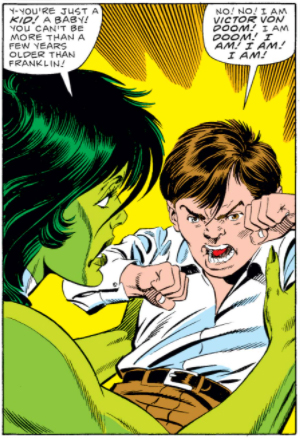 Reed quickly works out what's happened - the first time Doom sent the Baxter Building into space Sue had yet to develop her power to generate force fields, and so Kristoff's brain-washing must have stopped before getting to that bit. Again, we knew that already, so there's no big reveal here - all the fun for the reader comes through the way the team use their powers together so beautifully.

That's all for the Doom storyline in this issue - all that's left is for the FF to suddenly pause a moment and realise that their home has been destroyed, and then there's two pages of prelude to the Hate Monger storyline that will be taking place in the following issues. This features more Genuinely Racist Language, so to be honest I'm glad Doom won't be making an appearance! Instead of that we've got the final issue of "Beauty And The Beast", here next time!