Gather My Disciples Before Me

I've never read many Doctor Strange stories, and so have always assumed that they were fairly standard superhero stories with a bit of magical stuff layered over the top - something like Daredevil, but with hocus pocus instead of dirty alleyways. Thus I was a bit surprised when I read this comic and found that it wasn't particularly superhero-y at all, it's much more like a early Sunday evening TV detective show, where the hero spends most of his time just trying to get on with the business of running his consultancy - with the help of his manservant and social secretary - as well as his love life.

It's quite a pleasant read, something which is helped very much by the art of Kevin Nowland inked by Terry Austin. It does look very much of its time, but if you like the art of that time (as I do), it's a lovely looking comic. 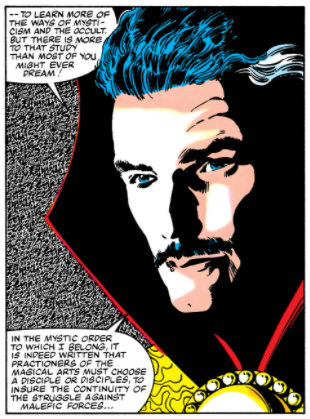 The main story is about Doctor Strange being hassled by various wannabes who've heard that his disciple, Clea, has left, and so have decided that he must want to take somebody new on. This leads to mildly comical scenes as hordes of people gather outside the Sanctum Sanctorum demanding to see Brian... sorry, the Sorceror Supreme.

Doctor Doom's appearance takes place on a page all to himself, set in Latveria, where a small child comes to tell him that Doctor Strange is without a disciple. A few years previously we might have expected Doom to send the child packing, furious that she has dared to suggest he'd been interested in a "lesser" mystic, but here, very much in line with the character we saw in This Land Is Mine, he thanks her for letting him know. 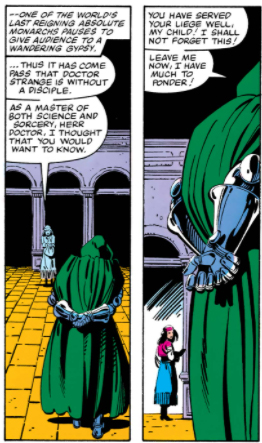 He then wanders off to the battlements for a bit of a think, as he is so often wont to do, and reflects upon the recent events. "Latveria is still in the throes of reconstruction... still recovering from the rule of the usurper Zorba!" he thinks, before deciding to stay at home rather than seek out the knowledge of Doctor Strange... at least for now.

It's a delightful little cameo that doesn't move this specific story anywhere at all, but does lay the groundwork for Roger Stern and Mike Mignola's "Triumph And Torment" graphic novel, where the two do meet. I wonder if Stern had that in mind here, six years earlier? It must have some significance because, as we'll see in a few weeks, this exact same scene will crop up again somewhere else...

The main story then continues, with Strange arranging a "testing" in front of an audience of the wannabes, during which he discovers that "The Sorceress Supreme" is behind it all. They have a Big Fight, and he realises that she herself is being controlled by an Evil Wand, which he grabs and smashes, freeing her and her daughter from its possession. 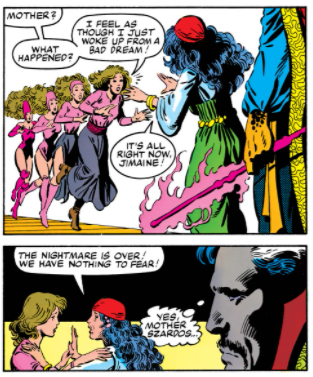 I am pretty sure there is something Freudian to say here about Wands controlling Magical Women - though not by me!

All that remains is for Doctor Strange to do some Mind Control on the other candidates so that they forget it ever happened, which he seems to do without any thought for the ethics of such actions, and that's the end of the story. It's a very gentle read and, to be honest, one which you wouldn't really miss if your memory got mystically wiped, but it's worth it just to get that little bit of Doom!