Last time we looked at an issue of Fantastic Four we were faced with an impenatrable mystery - we knew that Doctor Doom was trapped in a puppet body in Liddleville, but then we also saw Doctor Doom picking that body up, and then later giving orders to the Latverian ambassador. How could noted Robot-Builder and Duplicate-fiend Doctor Doom possibly be in more than one place at once?!?

Well obviously it's robots, but one of the many wonderful things about this extremely excellent comic is the way that John Byrne leads up to the "revelation", allowing the characters to work it out for themselves all at the same time, before going on to explore how this might all work. It's a great example of how his approach to the series worked, taking the best bits of the Lee/Kirby run, revamping where necessary, adding new aspects, but never forgetting to pay tribute to the originals. This is demonstrated with the cover too, which is a homage here to the cover of Fantastic Four #17. 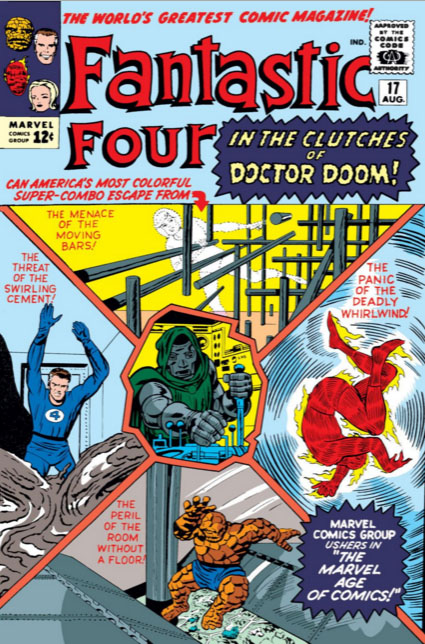 In Lee and Kirby's version Doom basically pitted the Fantastic Four against the unassailable might of... er... a building site, whereas Byrne takes the idea of splitting the team up and then makes it much more exciting. It's very similar to the way that Alan Moore used to take characters apart and then build them back up again, although I doubt either creator would appreciate the comparison.

The story itself kicks off with Reed Richards having another attempt at curing Ben Grimm of being The Thing... or at least pretending to. He suspects that his friend believes that Alicia only loves him when he's The Thing, and so is subconsciously preventing any "cure" from working - a lovely idea that not only makes the characterisation more interesting, but also generates lots of further story ideas.

Reed's musings are interrupted by Sue, who, in a jarring return to her previous duties as secretary to the team, has the Latverian amassador on line three. The ambassador is calling to finalise arrangements for the delivery of Doom's comatose body while, unbeknownst to the FF, Doom himself is sitting in the same room. 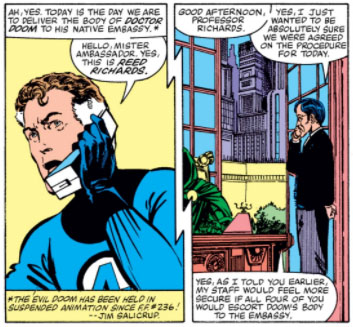 We then go over to Doom's New York castle, where we catch a glimpse of The Micronauts leaving after the end of their recent adventure in Liddleville. Byrne doesn't actually show The Micronauts themselves here, only the underside of their ship, thereby avoiding the copyright issues which means that The Micronaut's own series (and any guest appearances by them in other series) cannot be reprinted these days. I wonder if he did it this way on purpose? 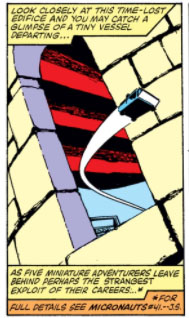 Inside a smaller version of this castle, within Liddleville itself, we see the Puppet Master taunting Doom, having trapped him there back in Micronauts #41. However, just as he's enjoying himself, who should suddenly appear looming above them but... Doctor Doom?!!

What the?!? How can Doom be in Liddleville, above Liddleville, and in the Embassy all at the same time? There's no time to ponder this though as we're taken immediately back to the Embassy where the ambassador very foolishly raises the possibility that Doom's latest cunning plan will fail. His boss does not take this idea in the constructive spirit in which it was intended, and once again demonstrates why the Latveria Embassy has won no awards for good Human Resources practice.

The FF arrive in the building and are immediately dropped into a series of pits, where they each have their powers neutralised before individually meeting Doom himself. Each member of the team gets their own mini-fight with Doom, during which they have to work out what's going on in their own way, eventually coming to the same conclusion at the same time as one another. 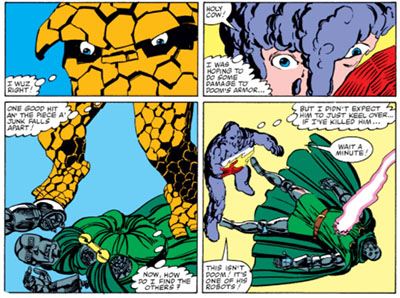 It's beautifully done - the reader will probably have worked this all out already, but seeing the FF seperately get there for themselves, in their own individual way, is a lovely bit of character work. With this "secret" now out in the open we get to see the various Doombots all gathering together, at which point they stop pretending to be Doom and work as a Robot Army. 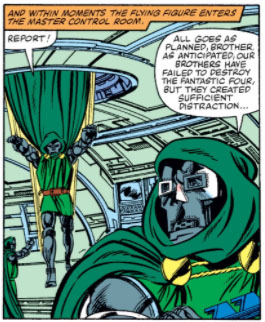 It's a great idea which I don't think has been seen before - we always knew Doom had lots of robot duplicates, but we've never seen how they might interact when they're all together. They return Doom's mind to his body and after a very brief sit-down he's back in charge, bossing the Fantastic Four around, completely unphased by their attempts to tell him off.

Doom reveals that he wants the FF to help him re-take the throne of Latveria, which they not unreasonably reject out of hand as an utterly crazy idea. "I did not expect immediate agreement", he says, and the issue ends with a dramatic splash page, showing that contrary to all expectations way back in Fantastic Four #200, deposing Doom from the throne has led to Latveria becoming a ruined wasteland. 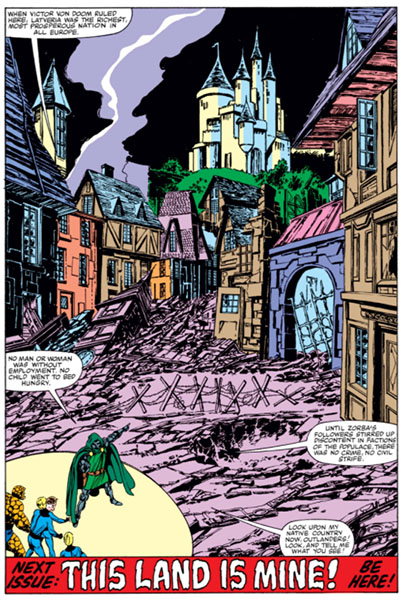 As I've said many times, I bought these comics when they first came out, and the idea that Doctor Doom's rule could have been beneficial to the people of Latveria was mind-blowing. I was so used to baddies being unremitting baddies, especially in American comics, that to see it even being suggested that Doom could be good for his people was incredible. It's one heck of a cliffhanger, and it leads into what I think is one of the greatest Doom stories ever. It's "This Land Is Mine", and we'll be looking at it next time!