On Sunday I headed over to distant WOOLWICH (Abbey Wood, to be specific) where I was due to meet The Validators to play at the "Abbey Acoustics" day at Lesnes Abbey. I had never been to that particular bit of London, so was astonished when I came out of the station to find that I appeared to be on the VERY EDGE of the entire city, looking out of a SPACESHIP BALCONY onto The Actual Countryside. In one direction: LONDON. In the other: HILLS!

I stomped round to the Abbey grounds to find Mr T Eveleigh, promoter, waiting. Tim - or Big Tim as he is known round our way for avoidance of confusion - had booked us in his capacity as The Only Promoter Left Who Still Books Us, on a bill with the ever mighty Grace Petrie. The whole event was being run by the local council, which meant we got paid and there was a LOT of nice gear to use, but there was also the small matter of the council not remembering to actually promote it very much, so it was Not Exactly Rammed!

The Validators arrived (with Tom and Frankie having come via The Woolwich Ferry, which made all concerned VERY JEALOUS INDEEED), as did various pals including The Hull Of My Boat, Mr W Pilkington, Mr M Tiller, The Hewitts, Mr D Greene, and various members of Clan Pattison. It felt like what I believe the young people refer to as MY SQUAD i.e. a TONNE of lovely people what I have ROCKED variously with the years. Ms E and Ms L Pattison managed to secure us the use of one of the PAGODAS that had been set up as shelter, so we even had our own AREA to spend the afternoon in.

And WHAT a lovely afternoon it was - the sun shone, BEER was had (via a couple of supermarket runs) and there was much YACKING, only slightly interrupted by the fact that we had to go and do a GIG in the middle of it all. The stage was one of those with an INFLATABLE ROOF, which made it feel very WARM, much like distant memories of being inside a bouncy castle and we thus duly all took our SHOES off when we performed. 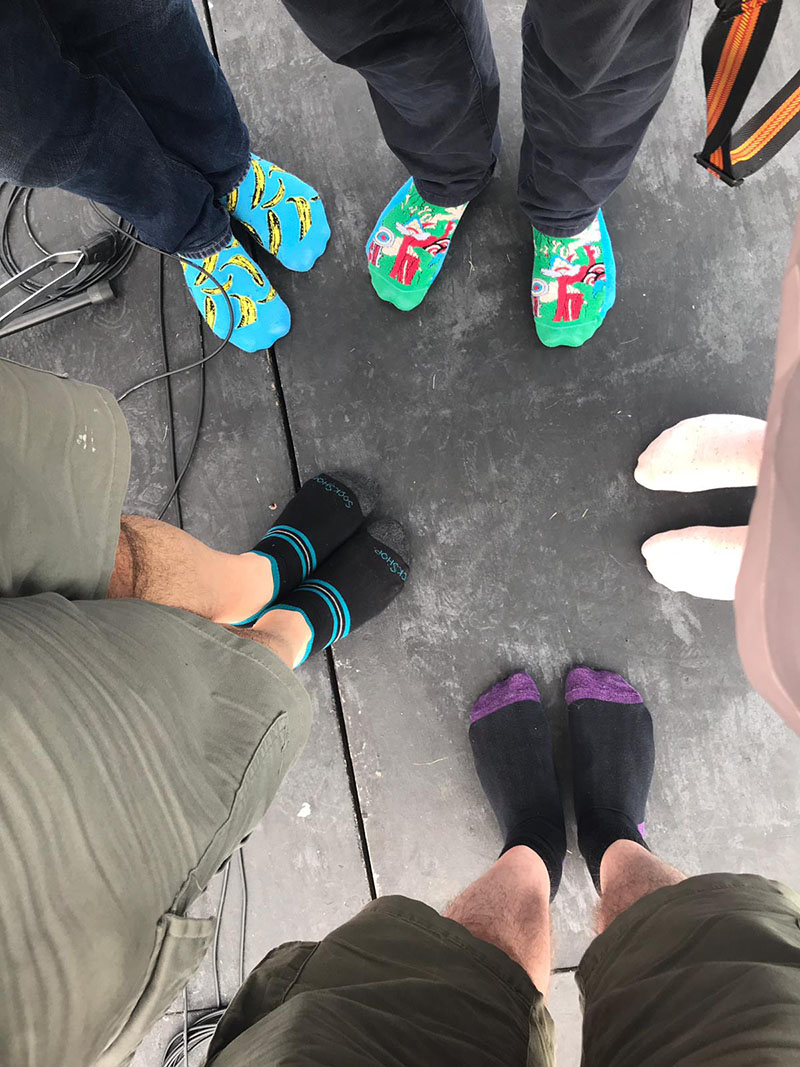 The gig went pretty well for the most part - the sound was GRATE, and the audience, though a bit far off (there was a whole row of pagodas about thirty feet away from the stage, and most people were comfortably sat around them), seemed to like it - but there were some ISSUES in the middle. Somebody - and there's no point saying who, it could have been anybody - forgot the WORDS quite a lot and, when it came time to do Have A Drink With Us was unable to remember what the chords were. We then launched into Payday instead and discovered EXACTLY the same problem. SOME members of the band found this HILARIOUS, but it should be noted that whoever it was was distracted by the fact that the soundmen had had to MIC UP his guitar because the pickup wasn't working, so he was unable to JIG ABOUT as much as usual, or to turn round during songs to see what everyone was up to.

Despite all that, it all went off jolly well (even if when we eventually DID do Have A Drink With Us the chords were soemwhat more VARIED than usual), with THIS as our eventual setlist:

It was a LIVE (band) DEBUT for I Don't Have To Worry About That, and the highpoint I think was the determination of a section of the audience to BELLOW the "OI! HIBBETT!" bit of Easily Impressed from a distance. It was all bloody delightful, and continued to be so as we all sat around for a couple more hours, including a BRILLIANT performance by Ms G Patrie at the end. Flippin'eck, that is someone who knows how to work an audience, she was FAB!

When it was all over we said our farewells, before a sub-group of us headed to the pub for a quick pint. It wasn't even seven o'clock when I got home, which was a VERY sophisticated way of doing a gig. More of this sort of thing please!