One of the FRUITS of my meeting with Mr J Dredge was the decision to consider re-un-de-writing part of our History-based webseries. We've had a couple of goes of filming it already - back in May we went to Hampstead Heath to film some Outside Scenes but couldn't get the sound right, so a few weeks later we tried again with a re-written INSIDE version. It all looked fine but we decided to have one more go to get it PERFECT, and it was while sorting through some WIRES as props for London Calling that I realised that I had an Actual Microphone which we might be able to use to get outside sound WORKING.

It's a KRAZY scheme - using a microphone to record sound?!?! - so we agreed that I'd try it out first to see if it worked before we went round re-doing stuff again.

Now, I could, obviously, just stand outside and say "This is a test to see if it works" but then again I could ALSO make a whole video thing instead, couldn't I? I spent about 0.02 seconds wondering WOT to do then remembered I had a small POEM called "You Need Knees" what I had written for the aforesaid 'London Calling' (tickets still available!) but didn't get used. It was my FAVOURITE thing I'd done so I thought "HA! Its time has come!"

So it was that yesterday afternoon I stepped out into The Olympic Village (it's where I live, OK? I wish people would stop going on about it) carrying a bag of camera and audio gear, dressed in my WEDDING CLOTHES... and short trousers. I felt like a bit of a pillock so had asked The Sole Of My Shoes to come along with me a) for moral support and b) because she's really good at camera FRAMING and all that. At one point I confessed to feeling a bit daft, but she told me not to worry. "We're in East London - they'll all be dressing like that next week."

We then spent a delightful 15 minutes filming before scuttling home to see what it looked like. The first bunch of shots looked GRATE, altho something seemed awry with the recording as it appeared to have picked up a lot of BICKERING. Where on earth did that come from?

The next piece of film however contained a final section which went like this:

VOICE: (off camera) It's not recording.
IDIOT: (in shorts) I thought it was?
VOICE: No, it's not.
IDIOT: Hang on, let me have a look
(he moves behind camera)
IDIOT: Oh yeah, you're right there. Here -
FX: CLUNK!

And that was all there was! So, a couple of hours later, we went BACK out and did the whole thing AGANE! This time we just left everything recording throughout and WHISKED through it, allowing me to come home and spend a happy hour or so editing together things like THIS: 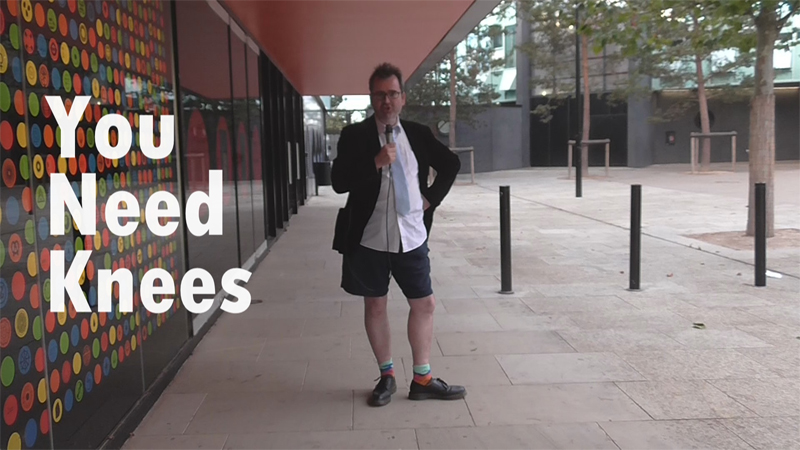 The final video is slightly ODD I must admit, but I do rather like it. It may end up just as a test or it may come out as part of the forthcoming series of FILMS that John and I are going to do, but whatever happens, we will always have the KNEES. Because, after all, You! Need! Knees!